You’ve probably heard about Australia’s wildfires. I’ve seen heartbreaking video clips of injured animals I may never forget. In response, two Edmonds business owners — Venus Forteza of Maize and Barley and Jack Crawford of Bridgid’s Bottleshop — have stepped up to sponsor a Feb. 13 benefit for those affected by the disaster.

Official reports indicate that at least 29 people are dead and 3,000 homes have been destroyed by the wildfires in Australia. Unlike many previous fires, inhabited areas have also been affected. Summer temperatures have reached 120° and this has been a drought year.

CO2 emissions from the fires are double what Australia produces in fossil fuel emissions each year. Smoke from the fire has circumnavigated the globe. What’s worse, their fire season has another month to go.

In addition, millions of animals have died. And even after the fires are controlled, which won’t be any time soon, wildlife habitat will have been decimated.

Forteza and Crawford will be hosting Kegger for Koalas at Bridgid’s Thursday, Feb. 13. Co-sponsors Big Time Brewing, Cameron Catering and Kaspar’s Catering are also pitching in.

The fundraiser will benefit two charities — World Central Kitchen and World Wildlife Foundation (WWF). “World Central Kitchen’s method of working with and empowering local communities has led to a lasting path to rebuilding areas impacted by disaster,” Forteza said. “WWF is the world’s leading conservation organization. They’ve set up an Australia Bushfires fund: 100% of all monies donated to this campaign go directly to Australia. The lasting devastation caused by these fires on habitats and entire species requires long term address for the preservation of Australia’s wildlife and ecosystems.”

Forteza has met with a lot of support along the way. “I came up with the idea on a Sunday night, texted Jack who immediately responded, ‘I’m always up for raising money. Let’s go!’” 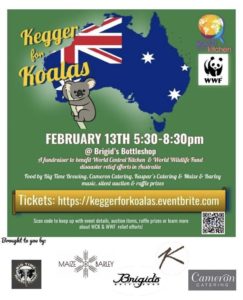 Rick McLaughlin of Big Time Brewing has the pizza covered. Expect to see some amazing desserts from Cameron Catering and all manner of delectable goodies from Kaspar’s Catering, which — with Forteza — has worked raising funds for World Central Kitchen in the aftermath of Hurricane Maria’s devastation of Puerto Rico.

As an aside, Chef José Andrés, who leads World Central Kitchen (WCK), has written We Fed an Island: The True Story of Rebuilding Puerto Rico, One Meal at a Time. It’s his remarkable account of how World Central Kitchen was able to make a dramatic impact there. WCK is already in Australia trying to restore food stability to the thousands of displaced fire victims.

Thus far the response has been huge.  They’re expecting a big turnout. Several hundred people have already expressed interest in the kid-friendly event. With 95 donation-based tickets already sold, they’ve collected $2,300. It’s extremely helpful for them to get your RSVP now so that they can order food accordingly.

It should be quite a party. Raffles, a silent auction, food and music will be part of the mix.

Wondering what to get your nature-loving/beer-loving Valentine this year? A string of raffle tickets or an item from the silent auction table might be an ideal gift.

All proceeds from tickets, auction items and a portion of all beer sales will benefit both World Central Kitchen and World Wildlife Fund’s Australian Brushfires Fund.

Please note that you’ll have to be present to win the raffle prizes, which will be drawn at 6:30 and 7:30 p.m. Silent auction winners need not be present at the end of the auction.

Forteza is still looking for donations to the silent auction. She is hoping to put some weekend packages that might include lodging, dinner and activities. Gift cards from restaurants and brew pubs, and merchandise from local stores would be gratefully accepted.

Why not plan a little break from your busy schedule and support two worthy causes?