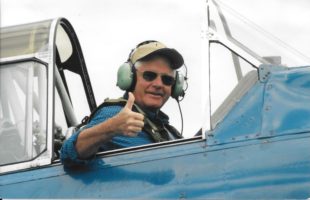 Bob was born in Emmaus, PA at his parents’ veterinary hospital. In his childhood, Bob was active in scouting and attained scouting’s highest rank of Eagle Scout. After graduating from Allentown High School he attended the University of Pennsylvania. Following graduation from Penn’s veterinary school in 1957, he was commissioned as a captain in the US Air Force and was stationed at Paine Field. While at Paine Field, he served as the base veterinarian, chief food inspector, mountain rescue team leader, traffic safety officer and most importantly met the love of his life, JoAnn. In 1959, Bob was honorably discharged from the Air Force and started practicing veterinary medicine in Lynnwood, WA. He and JoAnn were married in 1960 and recently celebrated their 62nd wedding anniversary.

Bob took the Rotary International motto ‘Service above Self’ to heart. He served as President of the Veterinary Medical Associations of Snohomish County, Seattle, and the State of Washington. He received the John L. Fluke Award for his contribution to the Snohomish County business community. He owned and operated the Lynnwood Veterinary Hospital for 35 years. After retirement Bob was Santa Claus at the Alderwood Mall Nordstrom. Bob thoroughly enjoyed working with the Rotary Club where he served as club president in 1993. With enormous help from his good friend, John Burbank, Bob went on to become District Governor for the 50 clubs in the Rotary 5030 District. One of his many Rotary International projects included traveling to Kiev, Ukraine to help found their first Rotary Club in 1991.

Bob and JoAnn raised three sons in Edmonds, WA. Every summer the family would take extended boating trips around the Northwest. Bob was the skipper of the family’s 23 foot boat the “Son of a Gunn” and in 1975, they were named – Northwest Boating Family of the Year. In 1977 Bob and his sons took the “Son of a Gunn” up the inside passage to Alaska. JoAnn wisely chose to stay at home. Bob and JoAnn were active in the Edmonds Yacht Club for 35 years. Some of his favorite places to cruise included Princess Louisa Inlet in British Columbia, the Hood Canal and the San Juan Islands. In retirement, Bob and JoAnn spent their winters in sunny Surprise, AZ.

Bob’s desire to see the world was legendary. Bob and JoAnn traveled throughout the world together. Among the many places they visited were: Thailand, Europe, Russia, Africa, South America, and the Galapagos. Bob and JoAnn also visited India and Ethiopia to administer Polio vaccines in rural communities. While at home Bob rarely stood still. Other activities included: acting in community theater, piloting airplanes, studying history, Toastmasters, skiing, reading & fishing.

Bob is survived by his wife JoAnn, sister Virginia, sons Jeff (Tina), Jim (Elizabeth) and Doug (Deborah), and granddaughter Tara, sister-in-law Jean and numerous nieces and nephews. He was preceded in death by his parents Edward and Vivian and sister Mary Vivian. Bob valued his relationships with his friends and family above all.

As a tribute to Bob, please perform a random act of kindness for a family member, friend, stranger or animal in his honor.