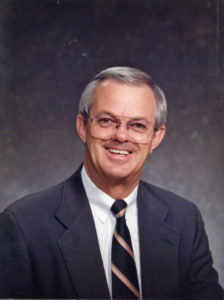 (For an audio version of this obituary, scroll to the bottom)

A lifelong Washingtonian, Ron was born on March 31, 1933 in Seattle, and died on June 7, 2021 in Everett. He grew up in Ballard, graduating from Ballard High School in 1951. While in high school he played basketball for the first Ballard team to play in the State Tournament and was honored to be named to the All-City Team in 1951.

He proudly served in the U.S. Army 1953-54, serving in Korea during the War. Upon discharge he attended Everett Junior College in 1955-57, where he also participated in basketball.  In 1957 he began a career spanning almost 30 years at the Snohomish County PUD, retiring in 1986. Hired as a meter reader, he retired as the South County Manager. His second career was six years as Executive Director of the South Snohomish County Chamber of Commerce, an organization he served earlier as Board president.

Ron was active in many industry and community organizations, including the Illuminating Engineering Society, president of the Electric League of the PNW, and was chair of the Marketing/Public Relations Committee of the NW Public Power Association.

He was a member of Lynnwood Rotary, active in the United Way of Snohomish County, and served on many association boards, including Pilchuck Campfire and the Edmonds Education Association.

Ron married Judi in 1994 and they had 27 wonderful years. He particularly enjoyed golf, and several trips to Europe, Hawaii and the California desert.

No public service at his request.