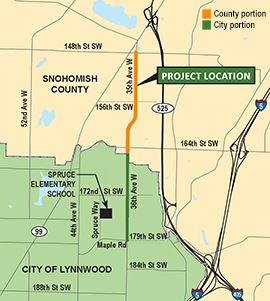 The Alderwood Mall area in Lynnwood continues to see tremendous growth and is a major economic engine for Snohomish County. Infrastructure improvement projects in the area are important for keeping that engine and residents moving smoothly and safely. One of Snohomish County’s major road projects in the area, the 36th/35th Avenue West Improvements Project just outside the city limits, has received a major boost in funding with a $3 million loan from the Washington State Public Works Board.

“We want to thank the board for this loan, which is a great push forward in getting this project to construction,” said Snohomish County Engineer/Deputy Public Works Director Doug McCormick. “We have been working in conjunction with the City of Lynnwood to improve this entire north/south corridor. With continued growth, we take every opportunity to maintain and enhance our transportation infrastructure to keep the county moving.”

This two-mile corridor improvement project is a joint effort between the City of Lynnwood and Snohomish County. Lynnwood’s 36th Avenue West project, from 179th Street Southwest to 165th Place Southwest, was completed in June 2020 at a cost of $10.6 million. The county’s section of the project is between 164th Street Southwest and Highway 99 and will be constructed in two phases:

The planned improvements to the existing two-lane roadway include the addition of a two-way center turn lane, sidewalks, bike lanes, bus pullouts, streetlights, landscape features, and stormwater drainage facilities for both phases. Both phases are estimated to cost $13.9 million. In addition to the $3 million loan, Snohomish County has also secured $2.58 million from a federal Surface Transportation Program grant.