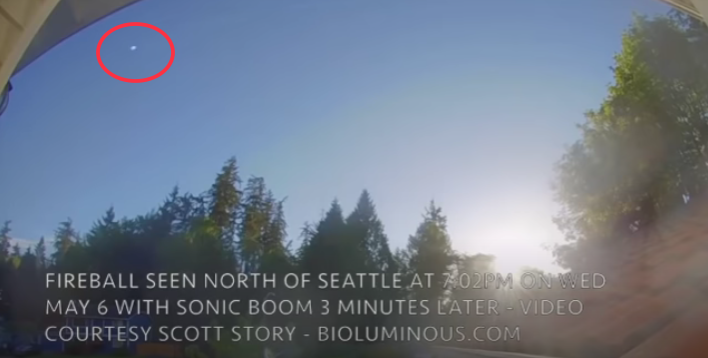 A sonic boom heard Wednesday night that shook houses and set off car alarms was likely from a “completely random” meteor, according to the American Meteor Society.

Around 7 p.m. Wednesday, a fireball was seen — and heard — flashing across the sky. After receiving initial reports of the incident, witnesses across multiple counties, including Snohomish, fireball report coordinator Robert Lunsford said the event was a likely meteor.

“There was a delayed sonic boom that definitely sounds like a large meteor passed over the Seattle area Wednesday night,” he said.

Lunsford said the fireball was likely an isolated incident and not related to a nearby Eta Aquarid meteor shower, which is only visible in the early morning hours.

Initially, Lunsford said he only received 12 reports from witnesses and said he would need at least a hundred reports to gather enough data to know the meteor’s trajectory.

Several South Snohomish County residents reported hearing the noise Wednesday night, including Mountlake Terrace resident Amy Wiskerchen. She was sitting in her living room when she heard a rumbling boom that she said shook her house.

“It felt and sounded like my house caved in or something,” she said. “But it only lasted a second or two and there was no damage.”

When Wiskerchen looked on Facebook, she saw she wasn’t the only person to hear the noise.

Sarah Allen, also of Mountlake Terrace, was at the dinner table when she felt her house shake. Allen said she figured it was too brief to be an earthquake and assumed a neighbor had thrown something heavy on her deck.

Lynnwood resident Nicole Griswold said the sound rattled her windows, causing her to think someone drove into her house or broke into her garage.

“My partner ran outside, but we never thought to look up,” she said.

James Pace, who lives near Lynnwood High School in Bothell, said he thought it sounded like an explosion.

“I came outside and thought I’d see a house on fire,“ he said.

According to Lunsford, the sonic boom was caused by the meteor entering the lower atmosphere, which he said is roughly 10 miles in altitude. He added that it’s possible small amounts of debris could have fallen.