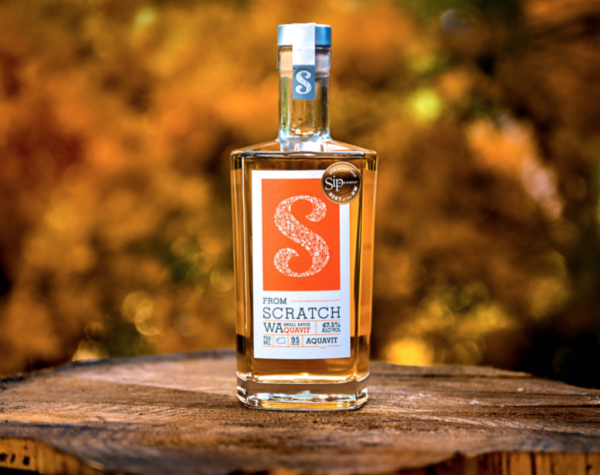 Aquavit is a Scandinavian spirit distilled using the distinctive flavor of caraway as its primary ingredient. Other botanicals, such as dill, fennel, or star anise can also be incorporated, making aquavit a more savory than sweet spirit – perfect for a variety of cool-weather cocktails.

Aquavit traditionally would be shared in a toast (or two) by Scandinavians at a holiday, a birthday, or other special celebration. In Scandinavian Countries today, the spirit may also be enjoyed by itself straight, on ice or alongside a beer. For the few distilleries and bars in the U.S. embracing this lovely spirit, they are using aquavit as a cocktail ingredient. A few easy ways for you to try aquavit: replacing the gin in a Negroni, trying it with your favorite tonic, or using it in a Bloody Mary instead of vodka.

While not very well known in the U.S., aquavit is steadily gaining ground – in both production and consumption. Because the Pacific Northwest has a large Scandinavian population (Washington boasts the top four largest populations each of Finnish, Swedish, Norwegian and Danish), it makes sense that much of the spirit would be produced in our region.

Kim and Bryan fit right in with predominantly Scandinavian ancestry, and they love their aquavit. It was only logical to pay homage to their heritage in the best way they know how: distilling a spirit with love and care.

Scratch’s more traditional Underground Aquavit uses caraway and dill in barreled potato spirit at 47.5% ABV. Beautiful flavor — taken out of the freezer and generously poured into a low ball glass, or in the Ballard Bridge.

Scratch also produces WAquavit. The name is a bit of word play and refers to Washington wheat aquavit. This barreled spirit stays true to the caraway and dill notes, while elevating the complexity with the addition of cardamom and orange peel. Also 47.5% ABV. Favorite recipes with WAquavit include our Fremont Troll and our Swedish Old Fashioned.

A nod to this region’s heritage, as well as Kim and Bryan’s own heritage, and to a delicious complex spirit.