“The April jobs report numbers confirm what we already expected based on the record number of individuals who have filed for unemployment benefits since March 7,” said ESD Commissioner Suzi LeVine. “While these numbers are dramatic, it is in alignment with what we expected as the state has taken the public health crisis seriously and is abiding by the ‘Stay home, stay healthy’ order. These losses are likely to continue into May, with a shift coming the other direction as our economy gradually re-opens.”

The Employment Security Department released the preliminary job estimates from the federal Bureau of Labor Statistics as part of its Monthly Employment Report.

The department also announced that March’s previously reported unemployment rate of 5.1 was confirmed. March’s preliminary estimated loss of 11,100 jobs was revised to a loss of 25,400 jobs.

Employment Security paid regular unemployment insurance benefits to 599,735 people in April, an increase of 414,277 over the previous month.

The state’s labor force in April — the total number of people, both employed and unemployed, over the age of 16 —  was 3,957,300, an increase of 66,600 people from the previous month. In the Seattle/Bellevue/Everett region, the labor force increased by 3,800 over the same period. 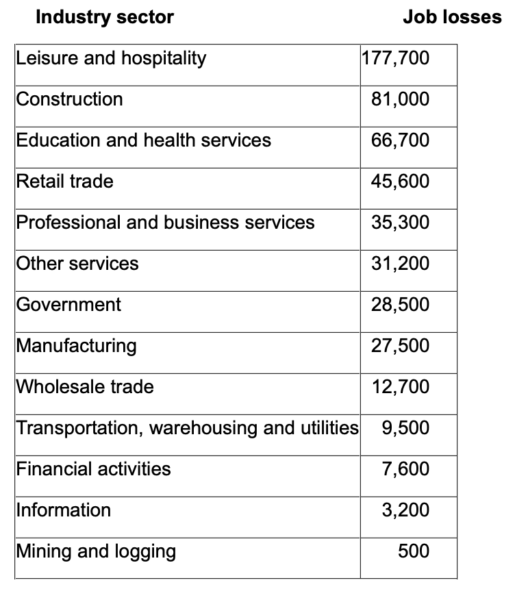 Washington lost an estimated 485,800 jobs from April 2019 through April 2020, not seasonally adjusted. The private sector contracted by 16.3 percent, down an estimated 463,900 jobs, while public sector employment contracted 3.7 percent with a net loss of 21,900 jobs.

From April 2019 through April 2020, 12 out of the 13 major industries contracted while only the information sector added jobs.

The three industry sectors with the largest employment losses year-over-year, not seasonally adjusted, were:

COVID-19 has had impact on the April 2020 survey data. The household survey measures labor force status, including unemployment. The establishment survey measures nonfarm employment by industry.

The information contained in the April report is reflective of workers who worked during or received pay (subject to Unemployment Insurance wages) for the payroll period which includes the 12th day of the month. For the April employment report, the survey reference week was for April 12-18.

Check out additional COVID-19 related information and FAQs from the U.S. Bureau of Labor Statistics.