The Snohomish County Multiple Agency Response Team (SMART) is investigating a shooting by an Edmonds police officer around noon Friday that resulted in the death of a suspect in a domestic violence incident at a Highway 99 motel.

During a briefing with reporters early Friday evening, SMART Team spokesperson Courtney O’Keeffe said that the Edmonds police were called to America’s Best Value Inn, located in the 22100 block of Highway 99, to investigate a domestic violence incident and had probable cause to arrest the suspect, a man in his 40s.

During the incident, “the suspect advanced at officers while armed with a knife,” O’Keeffe said. One officer deployed his taser, but the suspect continued to advance, and a second officer then filed multiple shots, O’Keeffe said. Officers immediately rendered aid to the suspect and medics on scene transported him to Harborview Medical Center, where he later died. 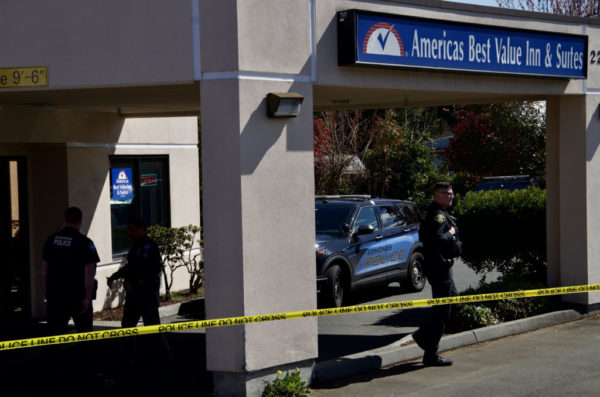 No one else was injured during the incident, which also involved a woman in her 40s who was in a relationship with the suspect.

The SMART team, which includes investigators and evidence technicians from various Snohomish County law enforcement agencies and Washington State Patrol, responds to and investigates police use-of-force incidents. Investigators were expected to be at the scene throughout the evening, O’Keeffe said.

The Snohomish County Medical Examiner will release the identity of the decedent, as well as determine cause and manner of death.

— By Teresa Wippel with reporting from Nathan Blackwell