So, I’m in my front yard, stubbornly going after the remnants of the devilish horse tail weeds that cling to the crevasses in our rock garden. I know, it’s a futile quest. I spot a yellow blur streak by. What is that? I drag myself off the ground and follow the blur to a rhody.

This is what greets me:

It is big — much bigger than a “normal” hornet or wasp. This one is more than an inch long. It has orange and black all over it. So, immediately I think, “uh oh… Asian Giant Hornet???” How? This is Edmonds, not the depths of Whatcom County where all the giant hornet sightings have been in our state.

No doubt about it: This guy is intimidating. He’s casually sunning himself and cleaning up, very cozy on my rhododendron. Grabbing the ever-present cell phone and carefully…very carefully…I edge up on him and snap! He ignores me completely — not that I could have sprinted off if I had to. Running is not my game these days.

Now that I’m in DEFCON 2 (the step just before we launch the missiles), Google is my last resort. Yep, big — nasty looking — orange — black…but stand down.

a Great Golden Digger Wasp. Never heard of it.

I do see the family resemblance. Un-push the panic button. Turns out that the Great Golden is not aggressive, is solitary, feeds mostly on flowers – not people – and it turns out the males do not have stingers. The females, I’ve learned, use their venom to paralyze small bugs to feed the kids. Go, Mom!

The University of Wisconsin Insect Lab even did a piece on this Giant Asian Hornet look-alike.

More news you can use: The Great Golden Digger is found almost everywhere in the U.S., Canada and the Western Hemisphere! And now, in my front yard. Okay, back to the horse tails.

Oh, one more fun fact about a Great Golden Digger: Not only does it pollenate, but as it digs it will aerate your soil while it eliminates uninvited yard pests! Now, that is fun. 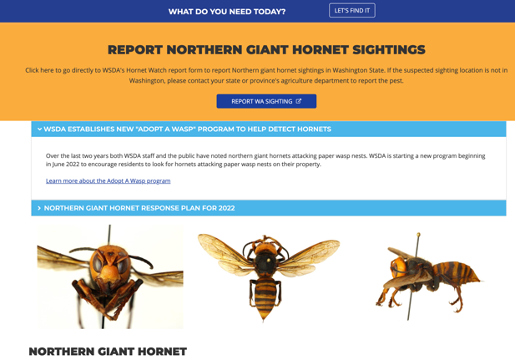 By the way, if you ever do see a Giant Asian Hornet – now known as the Northern Giant Hornet, thanks to its immigrating to Washington – the Washington State Department of Agriculture does want to hear from you. Here’s how to report them: agr.wa.gov/hornets