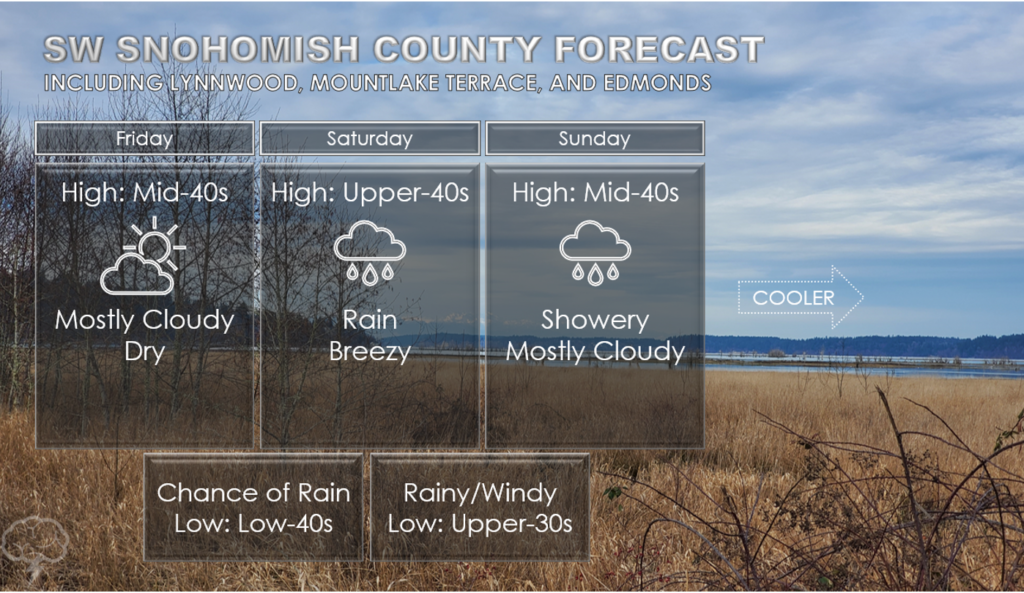 The month of February thus far has been very dry—abnormally so. Over the course of the first 16 days of the month, we’ve seen a mere 0.32 inches of measurable rainfall. We’ve had several days with a “trace” amount of rain, but not enough to register 0.01 inches in the gauge. The graph below depicts the total amount of precipitation from Feb. 1-16 for each year since 1999. As you can see, 2022 has had the lowest value in over 20 years of data.

I looked at data from Sea-Tac airport as well to compare, and the results were even more impressive. Using data that goes all the way back to 1945, I found that 2022 ranks second lowest in precipitation total for the first 16 days of February—second only to 1993, which saw a pathetic 0.04 inches.

I think it’s about time we saw a little bit of exciting weather; and finally, it looks like we’ll get it this weekend. Before that happens, we will have another dry day on Friday, with temperatures in the mid-40s and mostly cloudy skies.

The main event will arrive by Saturday, with wet and breezy conditions expected in the lowlands and much-needed snow in the mountains. In our region, we could see wind gusts between 20 and 35 mph. The bulk of the precipitation is expected to fall later in the day Saturday into Sunday, but after the front passes through, there is the potential for a convergence zone to form, which could enhance precipitation rates to those areas. By Sunday, we may see some lingering showers at times that could last into the start of next week. This system and its associated rainfall could double our monthly precipitation totals according to some models. In and of itself, this amount isn’t super impressive, but given our low rainfall totals this month, it’s worth noting.

By Tuesday, we should be mostly dried up. The main story for next week, however, is a return to cooler-than-normal temperatures. Highs are expected to be primarily in the low-40s, with lows dropping to near or below freezing. At this point, next week is looking mostly dry but cool.

February is going by very fast. March will be here before we know it—and with the new month comes a new season. Meteorological spring begins March 1. Some models are hinting at the chance for one more storm impacting us before the month ends, but there is still plenty of time between now and then for things to change. In the meantime, enjoy the rain this weekend—it’ll be back to the dry weather afterwards!