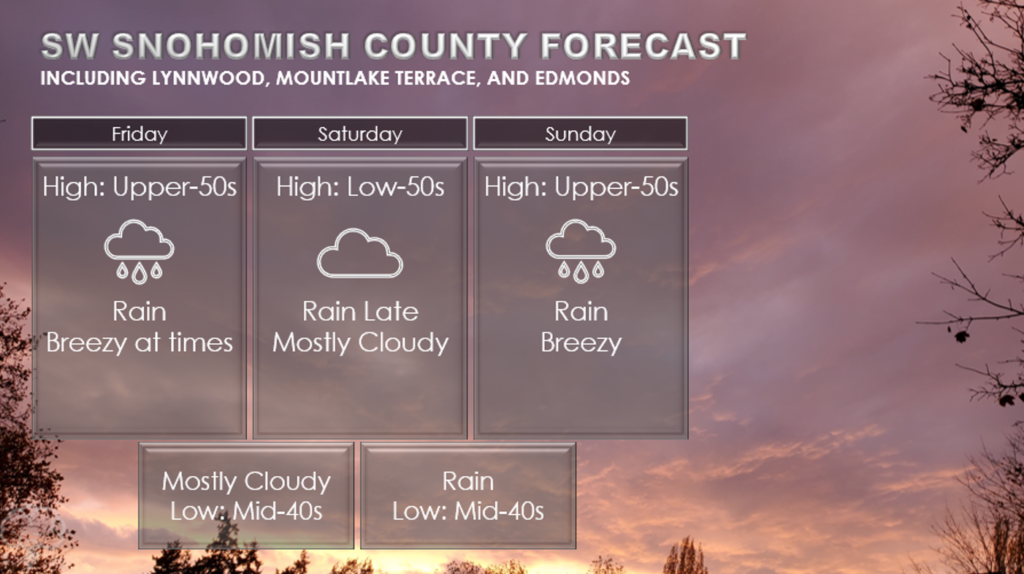 Yep, it’s definitely November. If you had no idea what month it was, it’s quite possible you could deduce it was November based on how much it’s been raining the past several days. In fact, besides one day of a “trace” of rain, we’ve had measurable rain every day of the month so far at Paine Field.

How common is this? Well, using data from 2001 to 2021, on average we see around seven days of measurable rainfall during the first 11 days of the month of November.

At the time of writing this, 2021 shows a value of 9; however, this is not including the data from Thursday (the 11th), which has already seen measurable rainfall. As a result, 2021 will come in at 10/11 days with measurable rainfall—the most since 2015, which saw measurable rainfall every day. You can see all this data in the chart above. In fact, 2021 and 2015 are very similar in the rainfall totals through the first 11 days of the month—both being above average. Not including the final data from Thursday, we’re already at 1.98 inches of rainfall so far this month, compared to the normal 1.69 inches.

And more rain is coming. A lot of it. 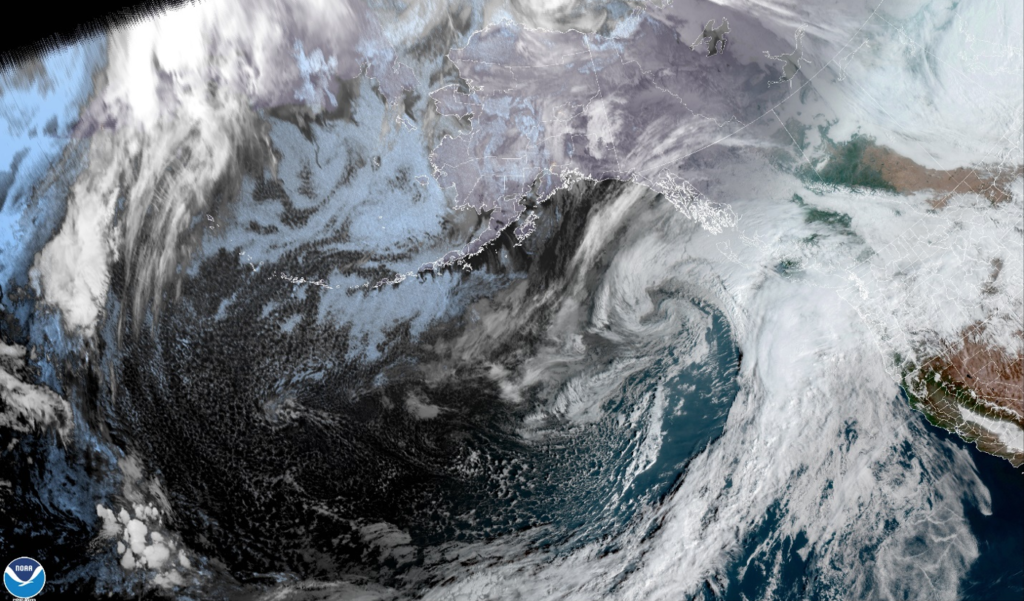 The above beauty is going to drench the Pacific Northwest. This is an atmospheric river.

In the image below, we can see a model image of “integrated water vapor” (IWV) for Thursday evening. This product is defined as the summation of liquid water that would result if all the water vapor in a vertical column were condensed. 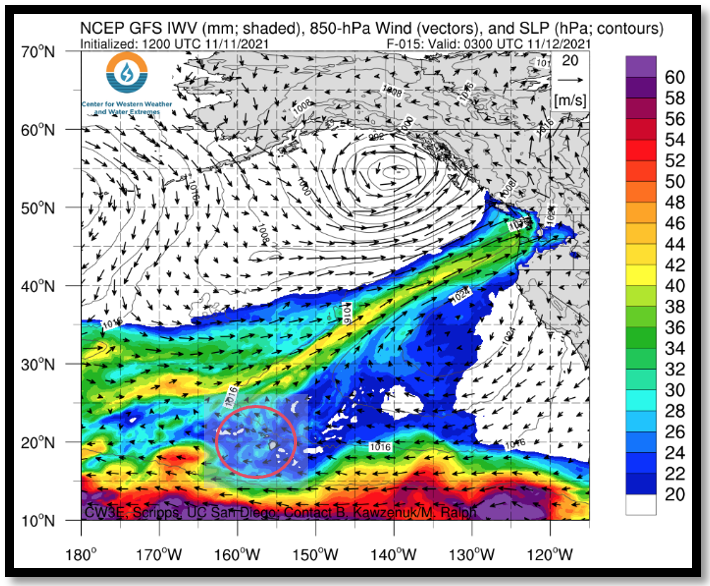 For a frame of reference, the Hawaiian Islands are circled in the image above. This shows that the moisture we’re experiencing as rain has originated from near Hawaii. Who needs that expensive vacation when that Hawaiian air can come to you?

This atmospheric river is expected to drop colossal amounts of rain across parts of Western Washington. Take a look at the model image below, which shows the total precipitation over the 48-hour span from Thursday morning to Saturday morning. 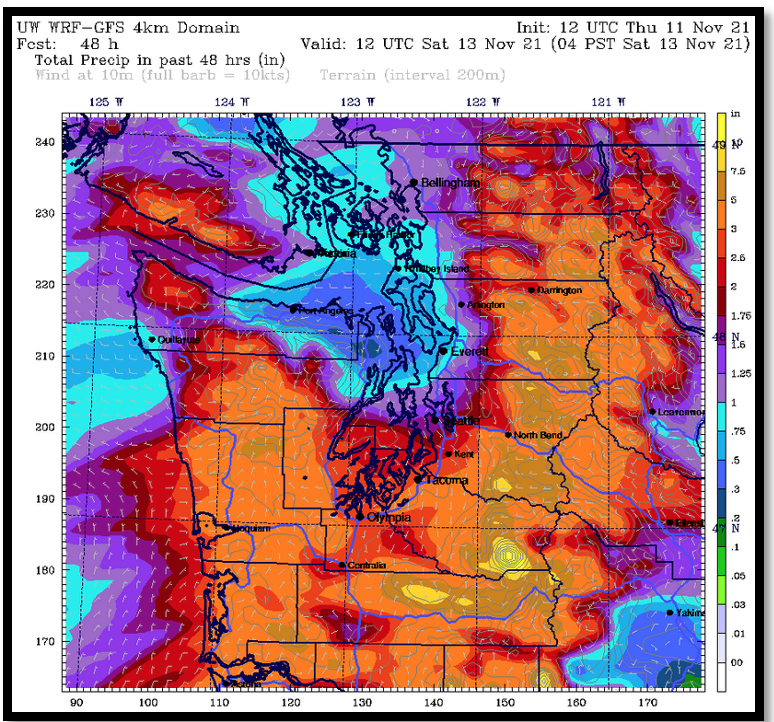 Look at some of these totals. Areas in the Cascades have the potential to exceed 3, 5, and even 10 inches of rainfall…wow!

On the other hand, look at some of the areas in blue, which is where this model depicts we could see less than a half-inch of rain over the same time frame. As a result of the southwesterly component of this atmospheric river, these regions have a strong likelihood to fall in the rain shadow of the Olympics. This would greatly reduce the amount of rain that would be seen. Some areas of Southwest Snohomish County are on the outer edge of this zone, so the rain we in our region see may be reduced if we fell within that rain shadow. At this time, the UW Ensemble average is showing 1.17 inches of rain near the Lynnwood area.

Regardless of exactly how much rain falls, it will be wet and there is the likelihood that many area rivers will fall into flood stage. As an example, take a look at the hydrograph below for the Snohomish River near Monroe. At the time of writing this, the river is forecasted to spike at 18.41 feet, falling into the major category of flooding. 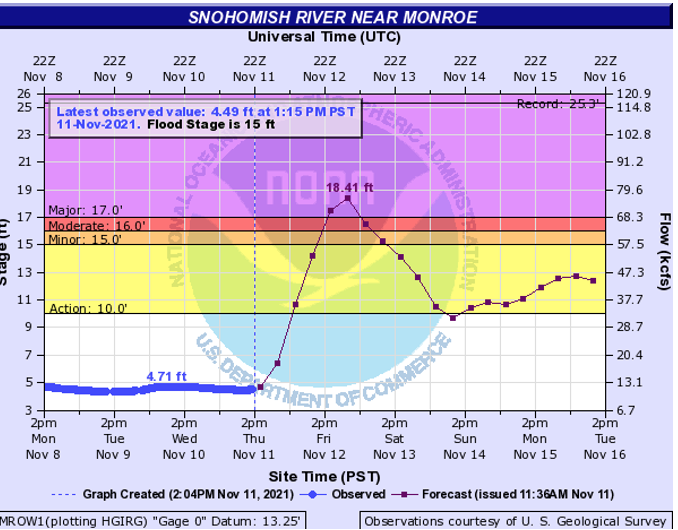 This system is expected to ease up by late Friday. Overnight and much of Saturday are expected to be predominantly dry. However, the rain returns again Saturday evening as yet another atmospheric river sets its sights on us. This one is not looking to be quite as impactful, but there is still time for things to change. Staying up-to-date on your forecast information will be your best bet as we progress through the weekend.

By Monday, we could exceed 2 inches of rainfall, which would put our monthly total at over 4 inches. For some perspective, our average November monthly rainfall total is just under 5 inches. At this time, it’s looking quite possible that November 2021 will be an above-average month in terms of precipitation.

Stay dry out there! Have a great weekend.