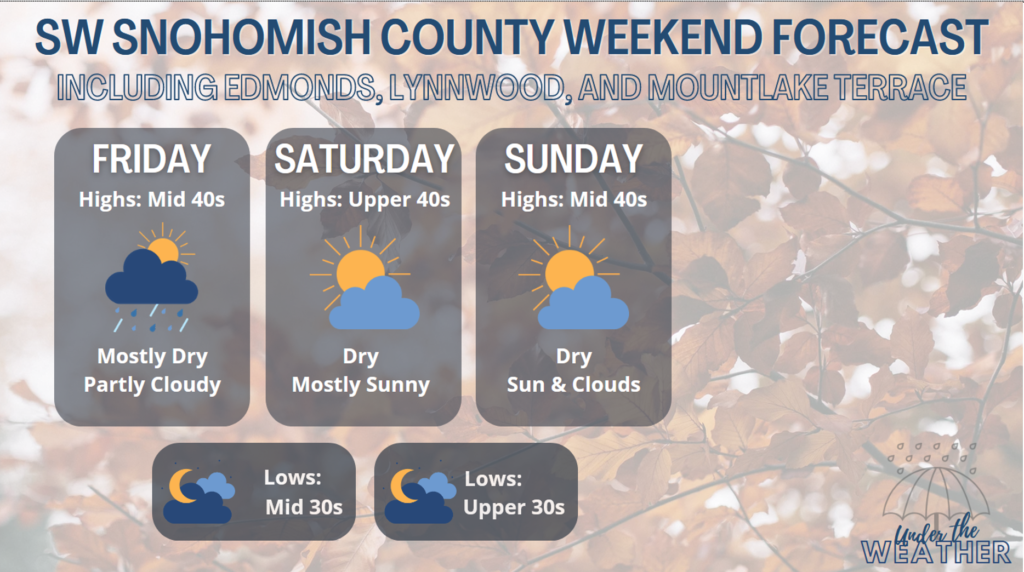 It has been quite the interesting week for weather in Western Washington. We’ve seen rain, flooding, thunder, hail, wind and snow — just to name a few.

I want to recap a couple of these different events, starting with the rain. We are going to broaden the scope a bit more than usual, focusing on five airports in Western Washington, which can be seen in the map below. 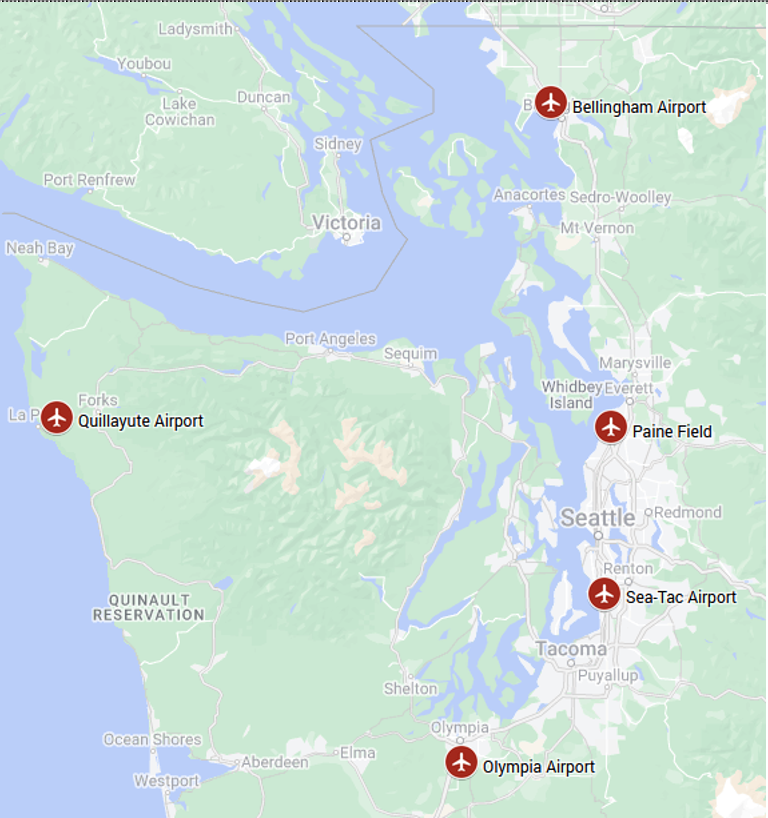 Pop Quiz: Can you match these airports with their corresponding airport codes? In no specific order, the codes are KSEA, KBLI, KUIL, KPAE and KOLM.

Below shows the total daily rainfall for these locations over the course of Nov. 3-6. Some of those numbers are quite astounding, while others… not so much. 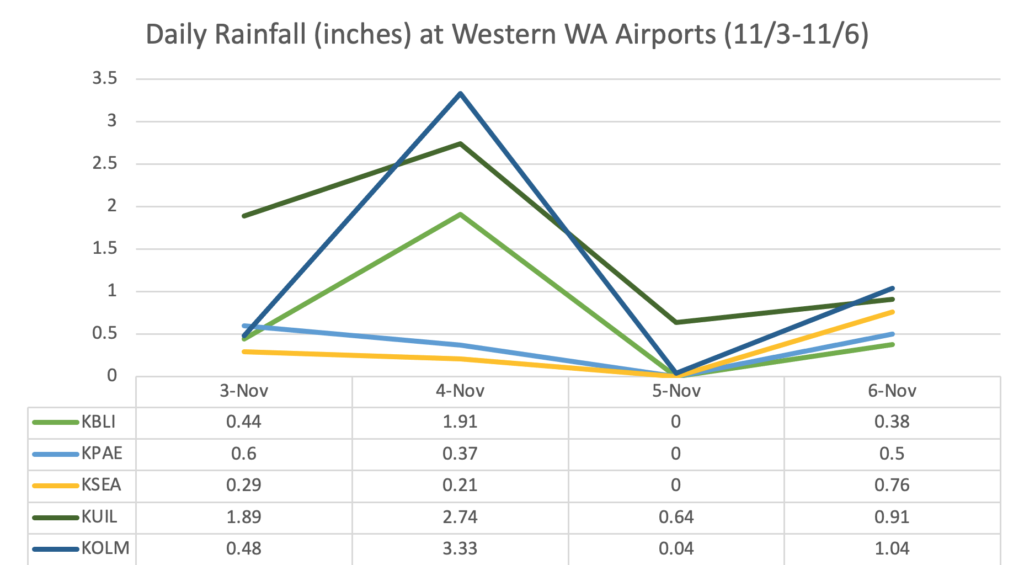 Check out some of those Nov. 4 totals. Olympia (KOLM) saw 3.33 inches of rain and Quillayute (KUIL) saw 2.74 inches of rain in just a day! That is absolutely crazy. (Did you get those codes right?)

But notice the totals at Paine Field (KPAE) and Sea-Tac (KSEA). What gives? You can thank our good friend, the Olympic Mountains, for greatly reducing the amount of rain that fell. 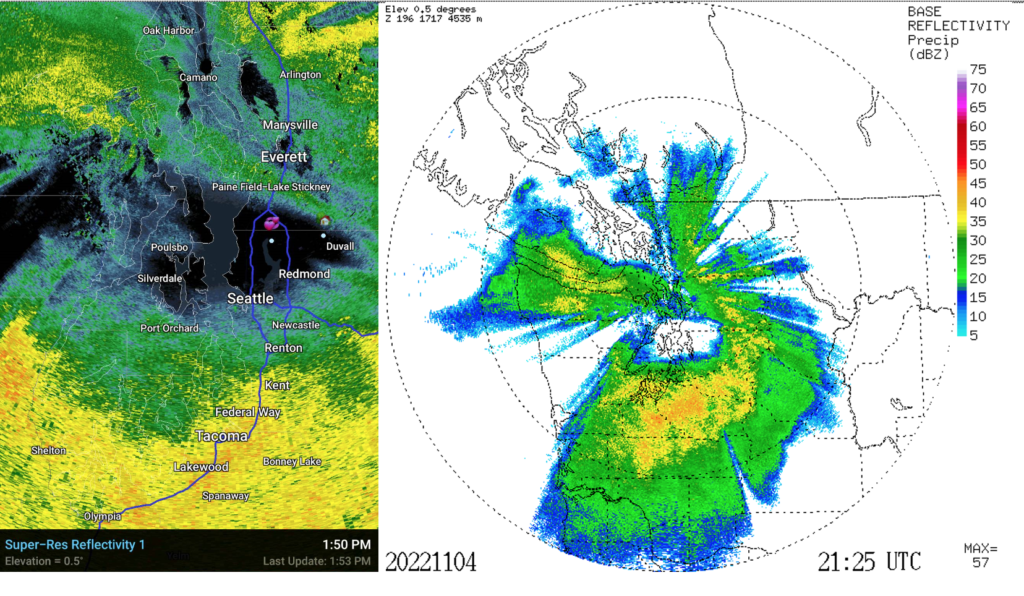 The direction of the incoming storm was a bit unusual, which put us right in the rain shadow. Notice the heavy rainfall south of us in Tacoma and Olympia in the radar images above. No wonder over 3 inches of rain fell! While we avoided the larger totals with the atmospheric river, we did see some heavier rain with the Puget Sound Convergence Zone that formed afterward.

After all the rain, here’s where each of these airports stand in their month-to-date precipitation (through Nov. 10) compared with the normal values. 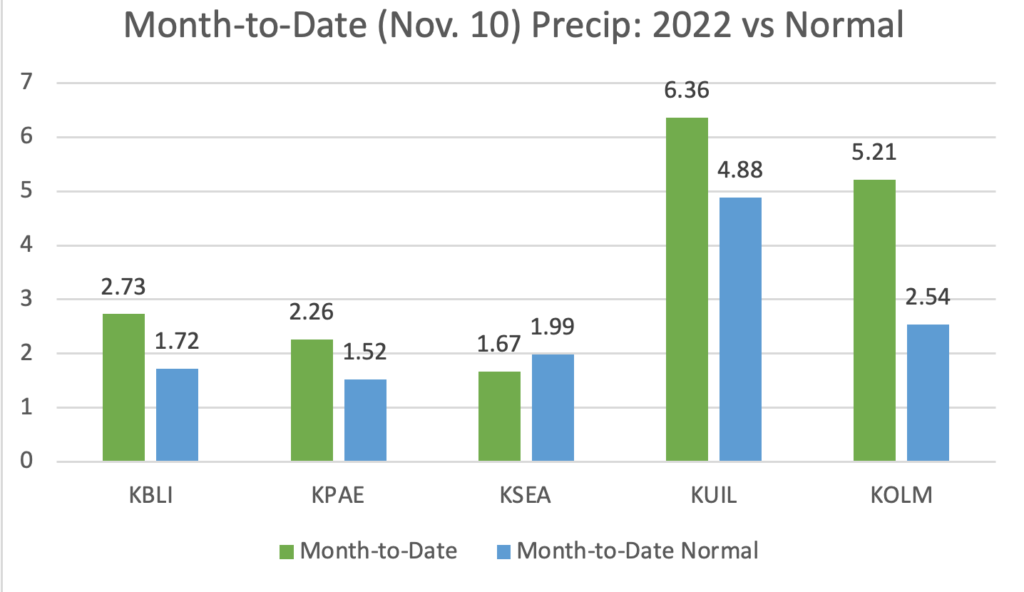 As you can see, all are above average except for Sea-Tac.

For us in Southwest Snohomish County, the rain wasn’t a huge deal, except for areas that can be prone to flooding. What followed the rain, however, was quite significant — namely, the wind.

National Weather Service Seattle tweeted a very in-depth description about how the strong winds developed. I highly recommend checking it out here.

At Paine Field, winds gusted to 40 mph, but other locations exceeded gusts of 50 mph. In Kenmore, I was carefully watching out the window and saw multiple power flashes. We didn’t lose power but many did. People near Lake Stevens and Marysville were especially hit hard and many were out of power for a few days. This was made even more challenging with the cold weather we saw toward the beginning of the week.

I want to take a second to thank all the men and women who worked hard to clean up damage and restore power to those who lost it. We are very appreciative of you!

As we look ahead to this weekend, we’re expecting quite the 180 compared to last weekend. Instead of being rainy and windy, mostly dry and calm conditions are expected — even if it’s still a bit chilly.

We may see a few isolated showers on Friday as a system impacts Oregon, but overall, we should stay dry. Highs are expected to be in the mid-to-upper 40s, with lows in the mid-to-upper 30s. This is slightly cooler than normal for this time of year, but nothing too out of the ordinary. At this time, most of next week looks to be similar — dry, albeit cool. After all the craziness in the past week, I think meteorologists need a bit of a break! Also, if you have any stories about the weather and/or damage you saw from last week’s storm, leave it in the comments below. I’d love to hear about it!

Have a great weekend