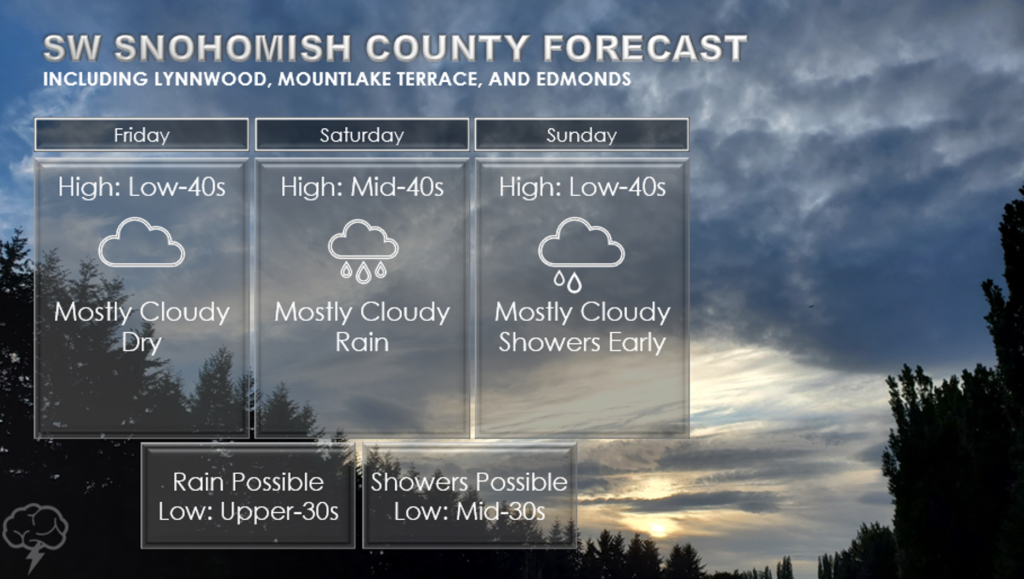 Below shows a chart of the total rainfall over the span of September through November for three western Washington airports: Paine Field (KPAE), Bellingham (KBLI), and SeaTac (KSEA). The green bars show the amount of rain we saw over the past three months, while the blue bars show what is climatologically normal for that same time frame. 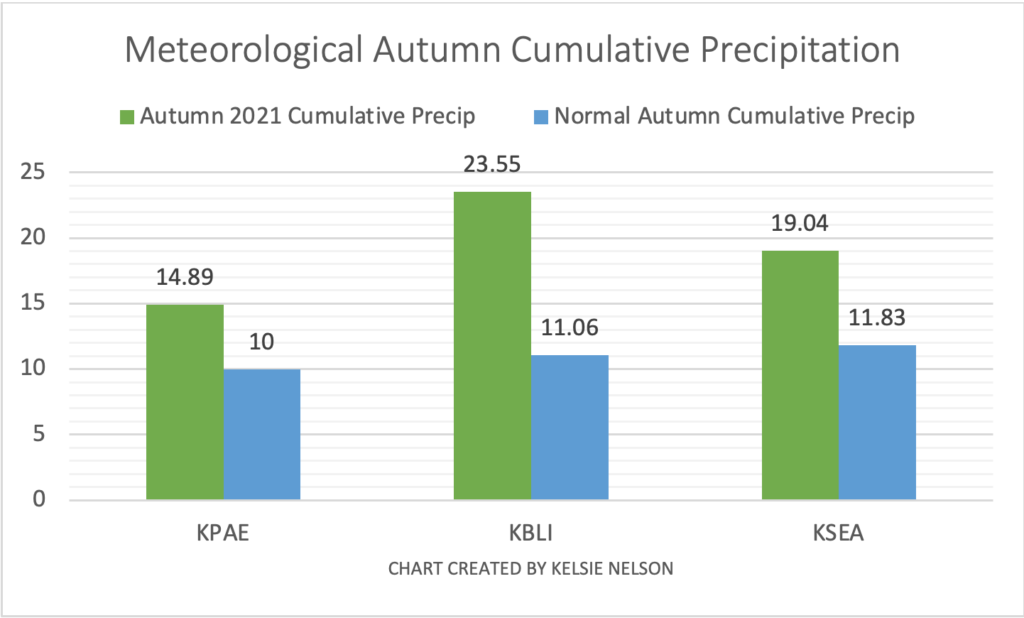 As you can see, the green bars exceed the blue for all three airports, meaning that we surpassed the average rainfall at all three locations. And it wasn’t close, either—the averages got obliterated! Both KBLI and KSEA posted record rainfall totals over meteorological autumn. Bellingham beat the previous record by a whopping 6.41 inches.

Closer to home, Paine Field didn’t quite beat the record, so we’ll have to settle with second place for now. I’m sure most of us are OK with that.

With meteorological fall now over, we look ahead to meteorological winter. And to start, it’s expected to be quite chilly. Over the course of the weekend, high temperatures will likely remain in the low-to-mid 40s, with lows dropping into the 30s. Brrr! Time to get those winter jackets ready.

Although we are going to be chilly, there is a bright side: We are expecting some dry weather over the weekend. We dried out over the course of the day Thursday and are expected to remain dry for most of the day Friday. The next system looks to arrive late Friday into Saturday, bringing precipitation into the area. With cooler temperatures in place, snow levels are expected to drop, leading to accumulations over the mountain passes. Keep this in mind if you plan to cross the Cascades. We dry out for most of the day Sunday before another system arrives Sunday night, again leading to mountain snow.

Now, some of your phone weather apps may show that little snowflake symbol for Sunday night into Monday. Before anyone jumps the gun, let me clear something up. Yes, we will have precipitation in place and cooler temperatures. But the temperatures will likely not be cold enough to lead to anything more than chunky rain, especially for areas in southwest Snohomish County at low elevations. Still, the possibility is there that we could see the first flakes of the season, no matter how slight. With the wet ground, any flakes that fall would likely melt on contact.

More systems are expected to impact us over the course of the week, leading to some more mountain snow and rain for us. If you’re itching to see some good snow, head to the mountains! We’ll have to wait a little while longer.