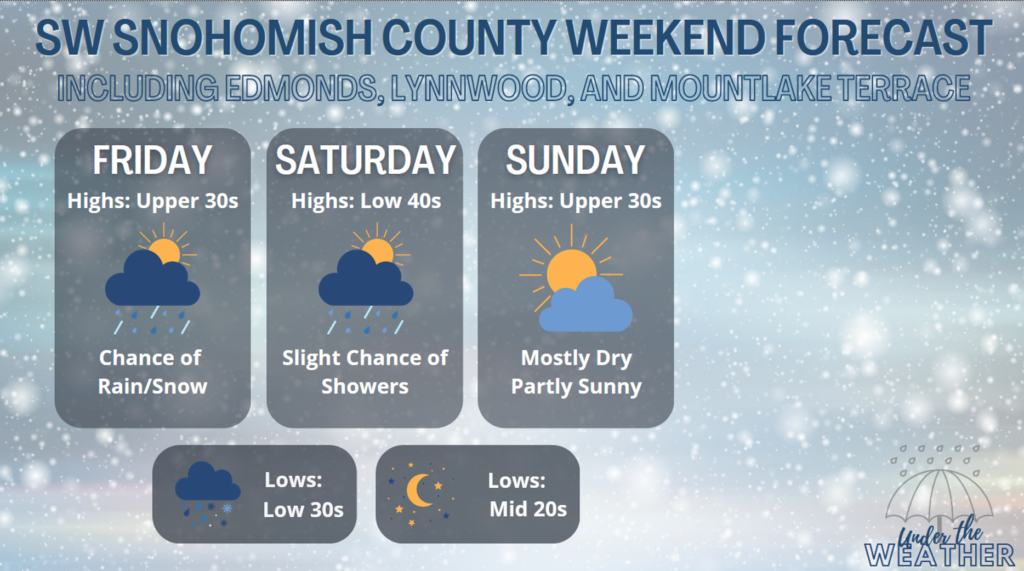 It’s been quite the interesting couple of days in Southwest Snohomish County. It’s not very often that we get a snow day in November, let alone one that was responsible for so many problems throughout the area. I was in south Everett on Tuesday night and the road conditions were quite treacherous driving home — and don’t get me started on the drivers themselves.

This event posed a big challenge for weather forecasters. The precipitation was a for-sure thing, but the question remained on how long it would stay cold enough to snow before transitioning into rain. For many locations, precipitation fell as snow for longer than expected, resulting in higher totals. 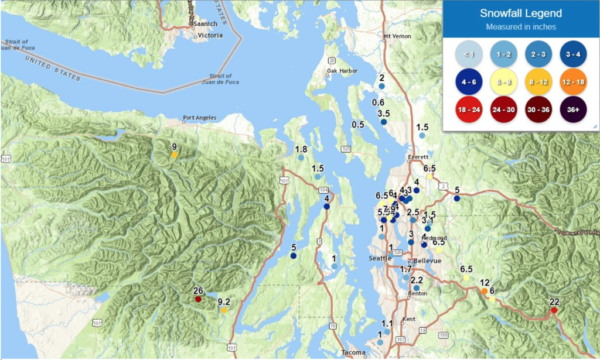 The above chart shows the snowfall totals for that event, courtesy of NWS Seattle, with most values ranging from 3 to 6 inches in Southwest Snohomish County. Shown another way, here are the written snowfall reports for Snohomish County. 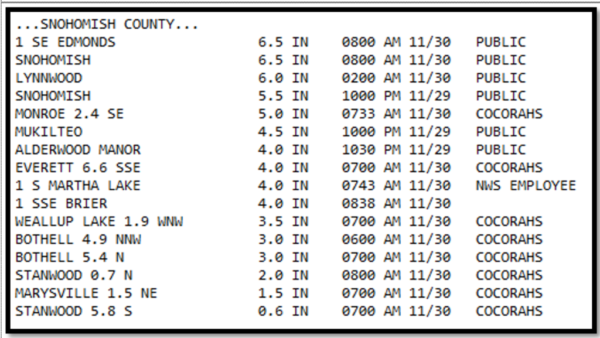 Not only were roads problematic, but because the snow was heavy and wet, tree branches (and even some trees!) began succumbing to the weight. This proved to be dangerous as they fell on vehicles, homes, and even powerlines, leading to widespread power outages. Still, despite all the chaos, I couldn’t help but smile at seeing the beautiful white stuff falling, especially as we near the holiday season.

If you’re like me and just can’t help smiling at the sight of snowfall—and especially accumulating snow — there may be a couple more chances to put a grin on your face in the next several days.

There’s no doubt that it will be cold as we head into the weekend. Highs will be in the upper 30s to low 40s, which is several degrees below average for the beginning of December. Lows are expected to be below freezing. The biggest question lies in if we see precipitation when it is cold enough.

A system will begin to affect us Friday, but this system remains far enough offshore that we will not see many impacts in our area. You can see the model depiction of this system below. 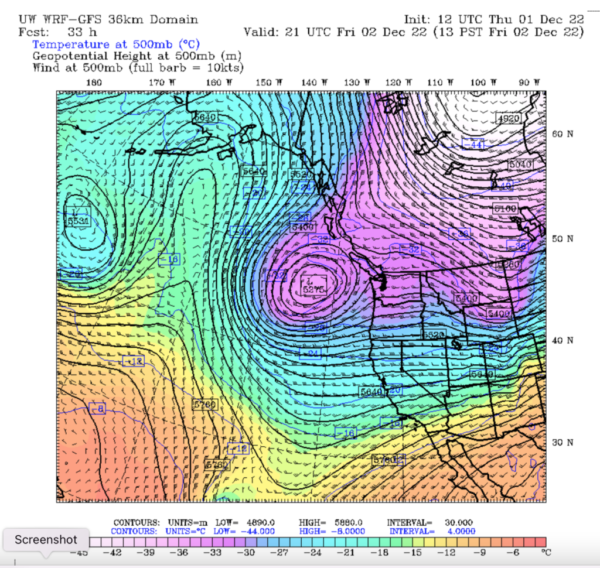 Still, the chance of showers remains — and if it’s cold enough, the precipitation could fall in the form of snow. Even if we see frozen precipitation, not much is expected to accumulate. The chance of showers will continue through the overnight hours, but by Saturday afternoon, we should be primarily dry. Sunday will be dry but quite cold. If you bundle up, it should be a nice day to get outside and go for a walk.

Ridging is expected for the first half of the week, but a few scattered showers are not completely out of the question. With cooler temperatures, we could see a bit more snowfall during this time, but right now, nothing significant is expected. Models are suggesting that more significant system is possible Thursday into Friday, but this is too far away to pinpoint any specifics. As always, I recommend paying attention to the most up-to-date forecasts to get the most accurate information.

Have a great weekend and stay warm out there. Happy December!