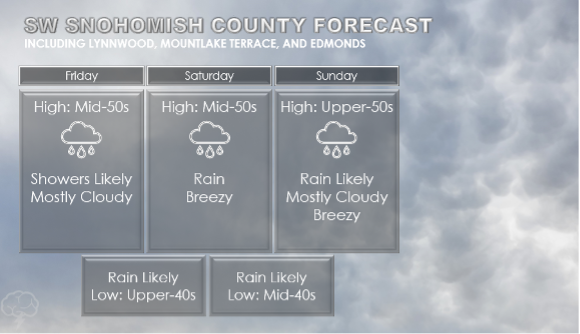 At this point in the year, we are no strangers to storms and the rain and wind that tend to come with them. If you’ve lived in Western Washington for any length of time, you are likely familiar with the idea of “storm season.” Even if you aren’t familiar with this concept, you’re about to be very well acquainted in the coming days.

Before looking ahead into the weekend and beyond, I want to show you all this absolute beauty of a storm that is impacting us Thursday evening into Friday. 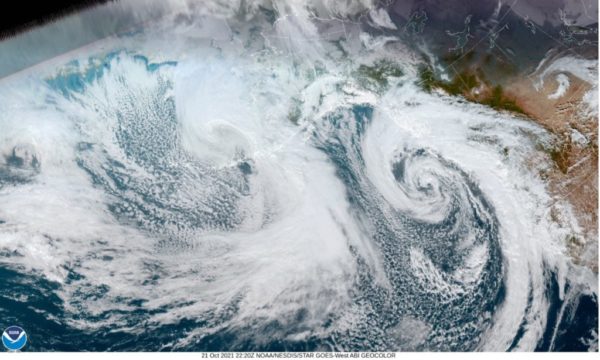 Just look at that swirl—I can’t get enough! This storm is quite a strong one, and if its center were closer to land, we would have to pay very close attention to it. As of Thursday afternoon, its central pressure was around 956 millibars (mb). As a frame of reference, this central pressure is approximately the same as the pressure that would be found in a category 3 hurricane. That’s pretty significant.

While the center is staying well away from land—thus mitigating the impacts we see in our area—the cold front associated with it is impacting us Thursday evening into the overnight hours. This system will bring rainfall—potentially heavy at times—and breezy conditions to our region. This is just one storm out of many that are expected to impact us over the course of the next several days. As I mentioned before, welcome to storm season.

The widespread rainfall from the aforementioned system is expected to transition into more showery weather on Friday. There is also the potential for a convergence zone to form in the area. There should be some dry moments on Friday, but they won’t last long.

A run-of-the-mill storm will impact us Saturday, bringing widespread rain and breezy conditions yet again. This storm, as suggested, isn’t expected to be anything too crazy—nothing we aren’t already accustomed to.

The big story is coming Sunday, impacting us through Monday. However, there remains some uncertainty as to exactly how big. Take a look at the UW WRF-GFS model for Sunday afternoon below, which shows sea-level pressure in the black lines. 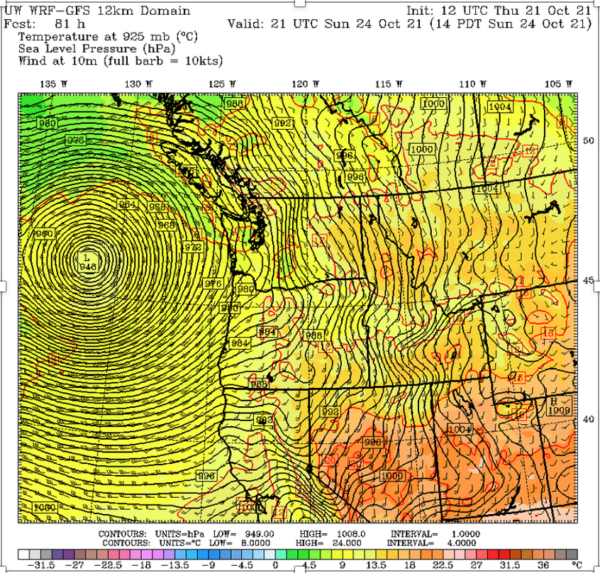 Before you start panicking, however, there is a lot of uncertainty regarding the path of this storm, which will greatly impact how strong the impacts are for us.

Last November, I wrote an article about windstorms in our area, which can be found here. In this article, I outlined a very specific track of mid-latitude cyclones that is needed for our most significant windstorms, which puts the storm center at the southern edge of Vancouver Island. At the moment, models have varying solutions as to where the low center may go.

First, the American model (GFS) puts the storm center very close to this sweet spot, which could lead to some significant winds in our area. 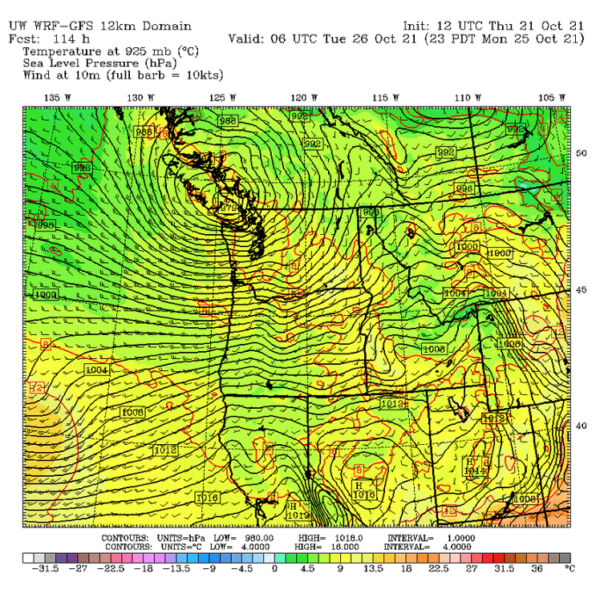 On the other hand, the European model puts the center much more north, which would still contribute to a wet and breezy day but would not be nearly as impactful as the first path.

With this uncertainty, it will be very important to pay attention to updates over the next couple days. I recommend following the Seattle branch of the National Weather Service on Facebook to get updates as soon as we get them (or you can check their website here).

In the meantime, you may want to get those rakes handy for cleaning up those leaves, just in case. Regardless of how windy it gets, we are still expecting a wet weekend ahead, so get those raincoats (or umbrellas, if you’re into that sort of thing) ready.

Looking ahead into the foreseeable future, nothing looks much different to what we’re expecting this weekend: rainy, occasionally breezy, and just overall a bit unsettled.