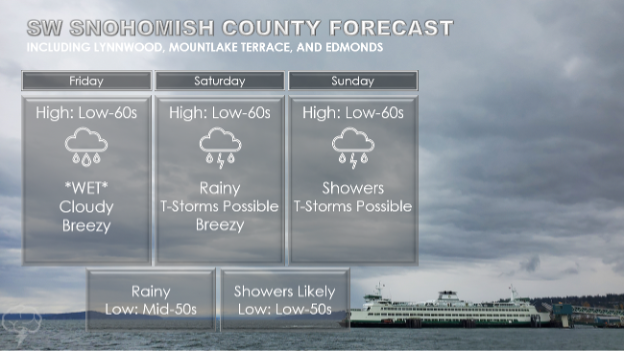 I’m not going to lie—I’ve been waiting for this day for a while. I’ve been waiting for the opportunity to write about an actual storm. To make things even better, this storm is expected to be a trifecta of excitement, complete with copious rain, wind and even the potential for thunderstorms. Let’s get right to it!

If you look at the visible satellite image below, you can see the culprit sitting out in the Pacific Ocean, poised to strike. 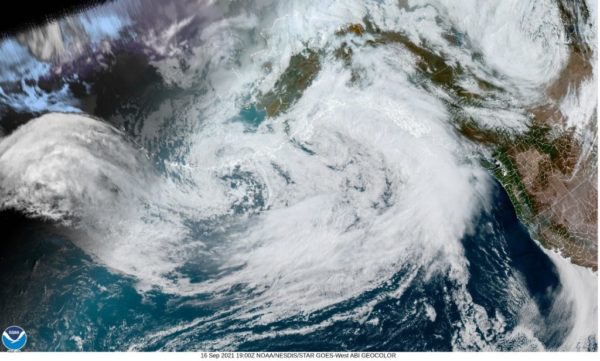 We are expected to begin clouding up ahead of this system throughout the day on Thursday, but Friday morning is when the main act begins. Below is a simulated radar image from the UW model, which shows a front arriving in the early morning hours on Friday. 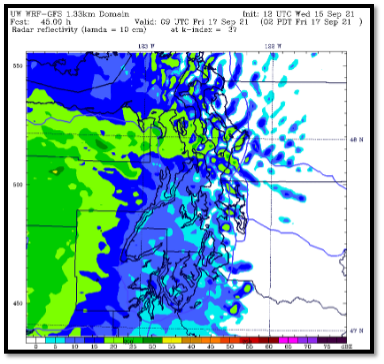 The rain from this front will last most, if not all, of the day on Friday, with varying intensities. In other words, it may not be the best day for yard work. By early Saturday morning, we could see upwards of an inch of rain. To give you some perspective, we’ve only had about three-quarters of an inch of rain at Paine Field since June 15 of this year. We could more than double that amount in a 24-hour span alone.

The rain won’t be the only story, either. Wind has the potential to be a big problem here. Take a look at the European ensemble for maximum six-hour wind gusts at Paine Field. 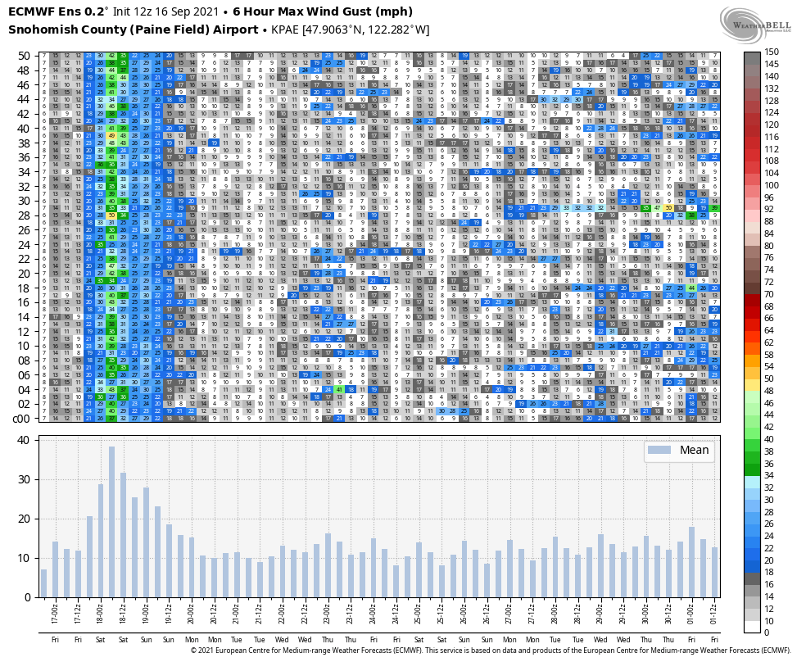 For this event, many ensemble members are forecasting a maximum wind gust of nearly 40 mph. This is pretty significant for an early season storm like this one, as most leaves are still on trees. There is then more surface area for winds to hit, making trees more susceptible to falling. To make matters even more concerning, soils are pretty dry as a result of very little rain over the summer. There’s the chance that we could see some downed trees and/or branches as a result of this storm.

The front moves east by early Saturday morning, being replaced by a corresponding upper-level trough. This will leave rain in the forecast for most of the weekend, but perhaps not quite as widespread. The big thing to consider for Saturday and Sunday is the potential for some isolated thunderstorms. The air will be relatively unstable, which can be seen in the European model below, showing Convective Available Potential Energy, or CAPE. 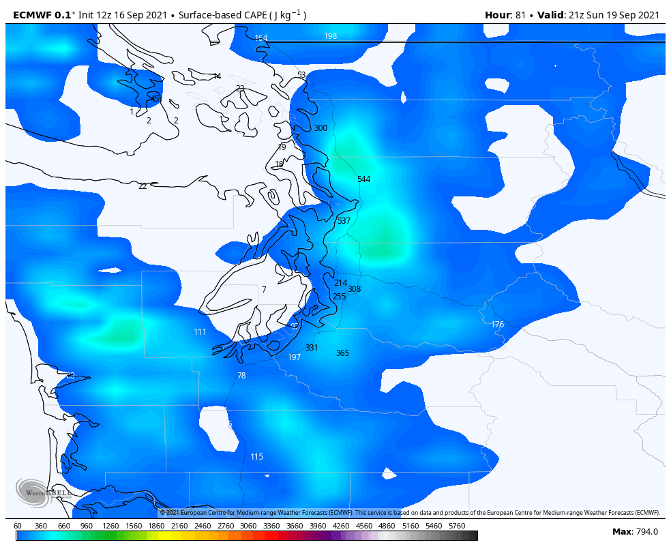 This product basically shows the amount of energy that a thunderstorm can tap into. CAPE values don’t get this high often in our area (though those in the Midwest may scoff at values such as these). There should be plenty of instability in the area, but that isn’t the only thing needed for thunderstorms to form. (You can read more about thunderstorm development here.)

It is pretty difficult for everything to line up in order to get thunderstorms in our area (meaning Southwest Snohomish County). Lightning is not a slam dunk, but even the possibility is worth paying attention to. You definitely don’t want to be caught off guard in a thunderstorm. Storms are more likely in foothill areas, so definitely keep that in mind. Remember, when thunder roars, go indoors!

By the end of the weekend, it is likely that we could see between 1 and 2 inches of rainfall, unless a thunderstorm sets up in just the right location, which could lead to higher totals. While this rainfall is needed, some areas may see some ponding of water, especially if storm drains aren’t cleared. Now is the time to begin preparing for this storm, along with future storms. Here are some tips that you can keep in mind, courtesy of the National Weather Service office in Seattle: 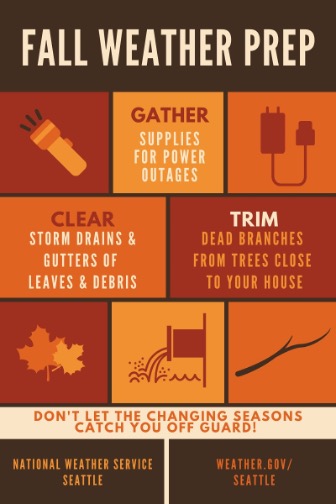 Make sure to take any necessary precautions to help minimize any potential harm. Have a great weekend. Stay dry out there!