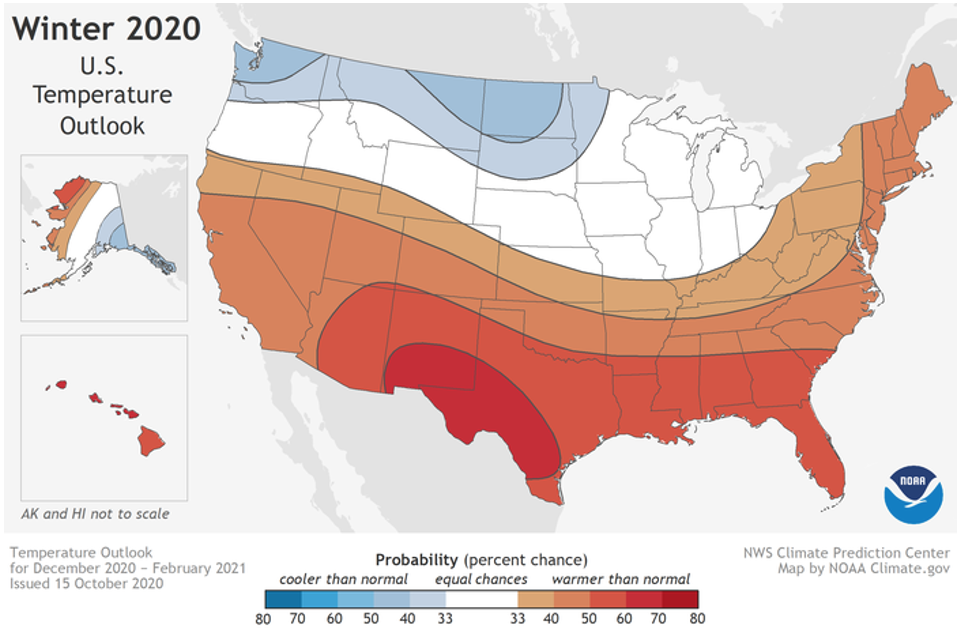 The Climate Prediction Center, part of NOAA, released its Winter 2020 outlook Thursday morning, which shows that the Pacific Northwest has a chance to have a slightly cooler and wetter winter. This is a typical consequence of La Nina. 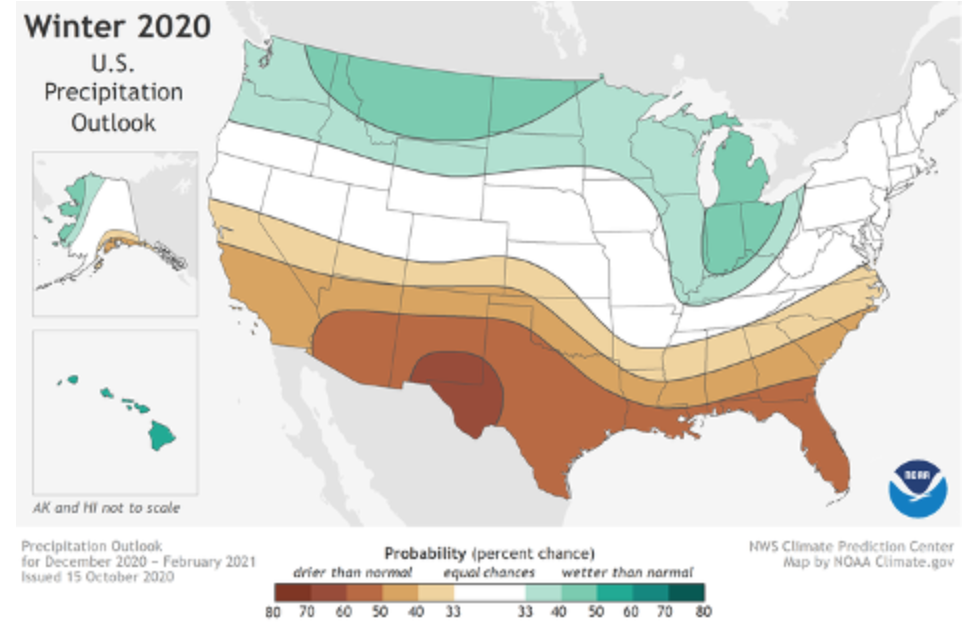 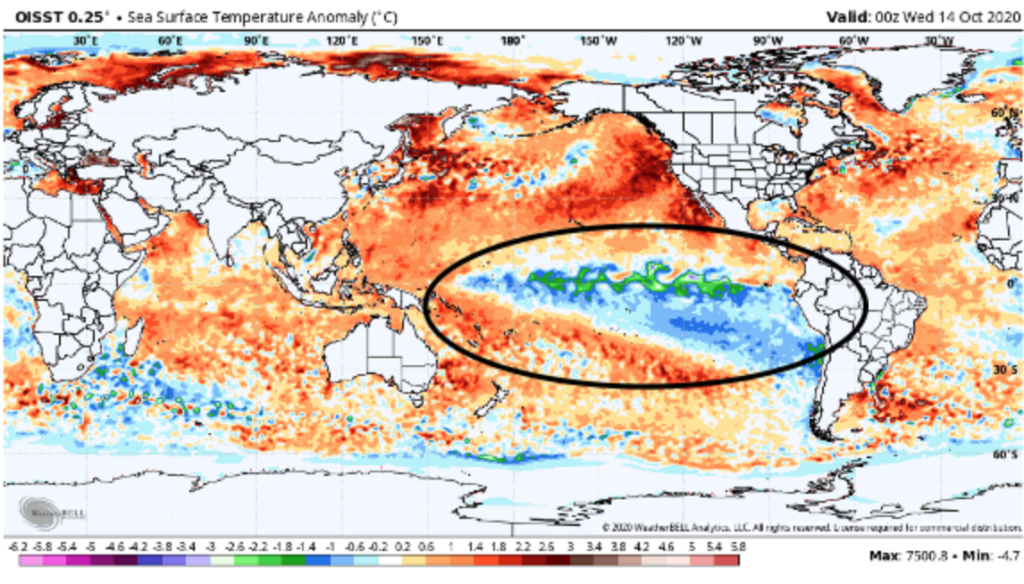 Above is a recent depiction of sea surface temperature (SST) anomalies across the globe, which shows whether SSTs are warmer or cooler than average. Notice the region circled, with areas of blues and greens, indicating cooler-than-average SSTs. There’s the La Nina.

You may be wondering how the sea surface temperatures have any impact on us in the Pacific Northwest, being so far away. The video below has a nice explanation of why.

Reiterating the video, these cooler ocean temperatures that result from the strengthening trade winds displace the jet stream northward, bringing the cooler and wetter conditions over the region.

You may remember in my column on chaos theory that I mentioned forecasts lose almost all skill after two weeks. So how is it possible to obtain these seasonal outlooks, months in advance?

An important thing to notice in the images of the winter outlook is that they are showing the probability of these events occurring. This is not forecasting specific temperatures or total amounts of precipitation. Being specific, they show a 40% to 50% chance of cooler-than-normal temperatures, and a 33% to 40% chance of wetter-than-normal conditions. So, there is still the chance that they don’t come into fruition. These are guides for the season, but not absolute gospel.

If there is the chance for a wetter and cooler winter, what does that mean for snow, especially in the lowlands? Lowland snow can never be guaranteed, and even short-range snow forecasts have difficulties. But we can look at observations from past years to see what conditions tend to occur during past La Nina years.

Michael Snyder (@SeattleWXGuy on Twitter), local storm chaser, did just that and created a spreadsheet showing the different weather conditions for El Nino years (weak or strong), neutral years, and La Nina years (both weak and strong). The data is for Sea-Tac airport, and the results are quite interesting.

The rows range from a strong El Nino to a strong La Nina. As you can see, neutral and La Nina years tend to have more snow in the snow/month category, which is the average amount of snow per month over the span of November through March. You may look at the weak El Nino category and say, “It’s the same value as neutral and strong La Nina.” However, remember that crazy snow in February 2019? That was a weak El Nino. That event is an outlier with the rest of the data. If you ignored that event, the values in that row change a bit:

Still, a lot of factors need to come together for this to happen. For us to get snow in the lowlands, all the ingredients must align. So, while we cannot state with absolute certainty that we will have a decent snow year, the data suggests that we could be in for a fun winter, at least for my fellow snow-lovers.

Now, here is a look at your weekend forecast: 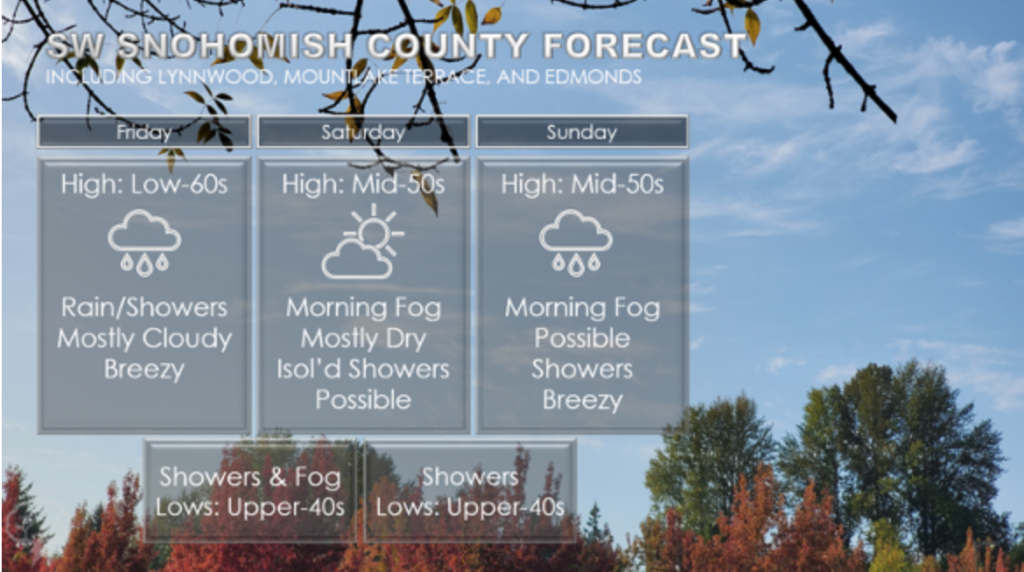 At this point, this weekend seems to be a lot calmer than last weekend. A system is set to arrive on Friday, bringing with it some showers and breezy conditions. Rain totals are not looking too impressive, with up to a quarter inch forecast. Nothing too crazy expected in the wind department either, with gusts between 20 and 25 mph possible. Fog is possible Friday night into Saturday morning, so if you find yourself “among the clouds,” take necessary precautions, especially when driving. Besides the chance of some isolated showers on Saturday, we are looking mostly dry. It should be a great day to head out to the pumpkin patches and corn mazes. Another system arrives Sunday—again, nothing too significant is expected. I will mention that there seems to be some model discrepancy regarding the amount of rainfall both Friday and Sunday. The European ensemble suggests that close to three-quarters of an inch could fall throughout the weekend, while the GFS ensemble suggests near a quarter of an inch. Looking at different models, it looks like near a half inch could fall over the course of the weekend. Regardless of exact amounts, it’s nothing that we cannot handle! 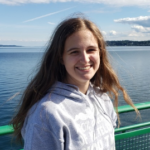