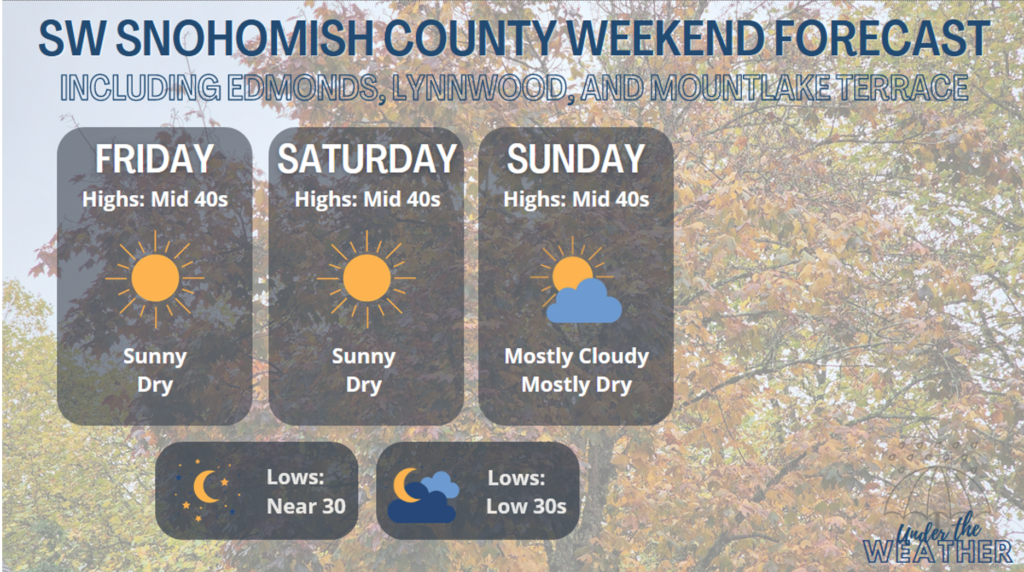 Much of Western Washington had a wet start to the month of November, but since that atmospheric river, not much rain has fallen. This is abnormal — usually the month of November is our rainiest month of the year. The image below shows the total accumulated precipitation at KPAE for this month so far.

You can see that we had a week or so where we received over two inches of rain (2.26 inches, to be exact), but afterwards, we stagnated. We’ve officially had nine days in a row with no rainfall, but — spoiler alert — this number may increase to at least 12 before we see more rain. The highest number of consecutive days without measurable rainfall in November is 10, so we will likely set a new record for that.

If we did not receive any more rain this month, 2022 would rank as the second driest November at Paine Field on record; however, that is looking rather unlikely, as rain is poised to return by the beginning of next week.

Ridging is expected to stay in place for most of the weekend (which can be seen in the model depiction below). Highs for Friday and Saturday will be in the mid-to-upper 40s with sunny skies. If you decide to go outside to enjoy the sun, make sure to bundle up—it’ll still be a bit chilly! 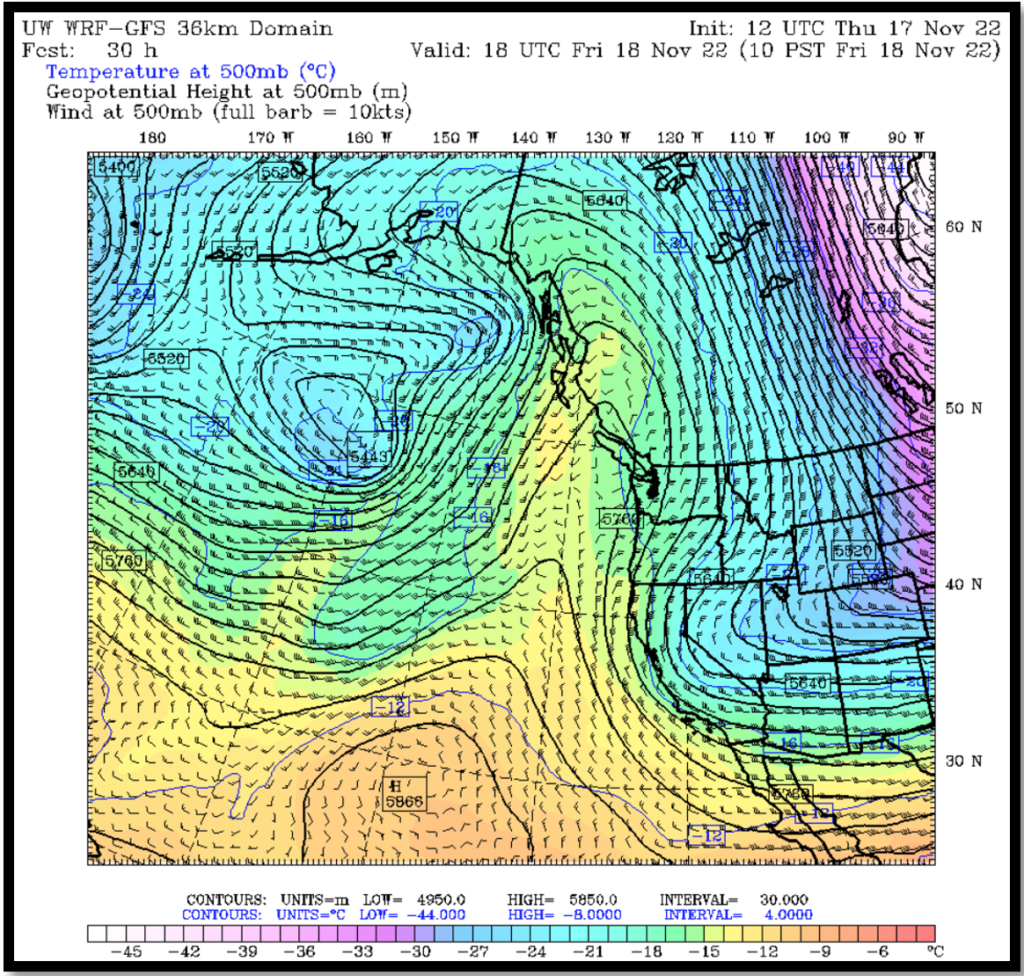 By Sunday, the ridge is expected to weaken and move east. This will allow a system to finally make its way to our area without being blocked by the ridge. We may see some light rain with this system Sunday night into Monday, but nothing significant is expected with this relatively weak system. Highs on Sunday will likely remain in the mid-40s.

However, a more organized system lurks behind it, which is expected to arrive on Tuesday. There is the possibility of another atmospheric river event mid-next week, but there are uncertainties on that at this time. Keep an eye on forecasts to get the most up-to-date information.

The Climate Prediction Center (CPC) Precipitation Outlook shows a 40-50% chance that we’ll see above-average rainfall for Nov. 23 through 27 (as seen below). 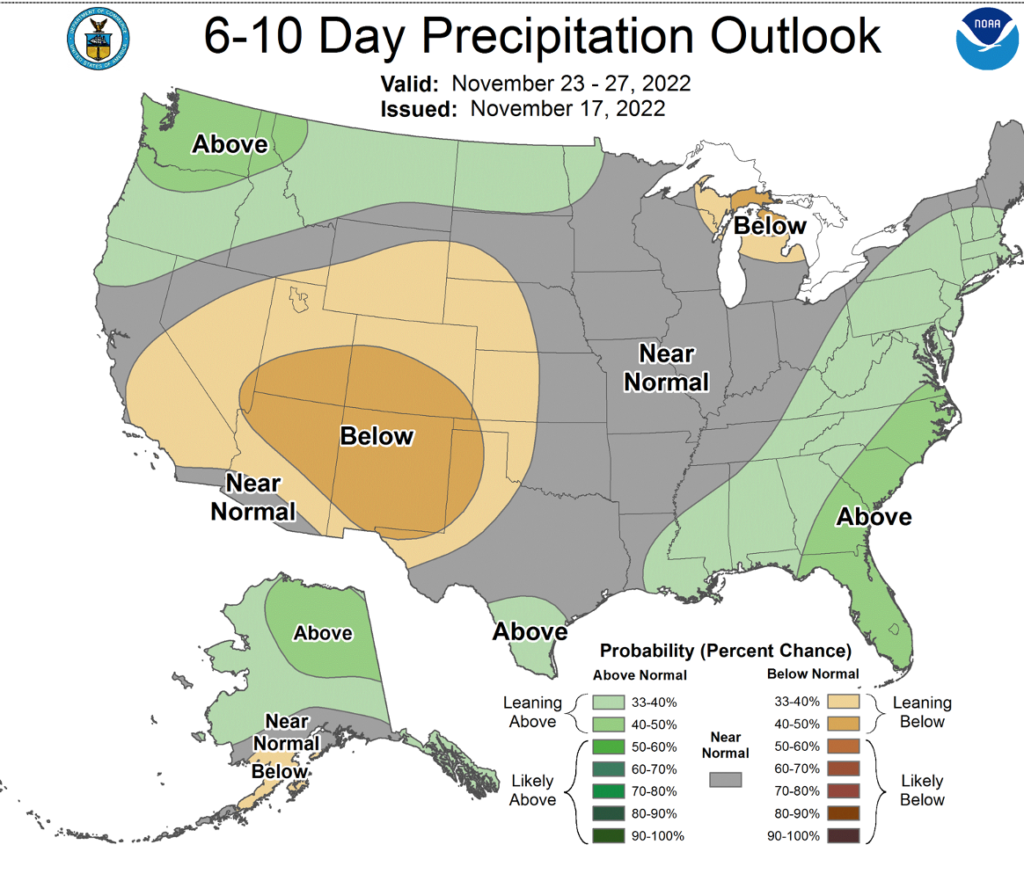 It looks like the November rain is back. As to how much rain we might receive through the end of the month, long-range models are suggesting we could see an additional 2 to 3 inches. If that came to fruition, we would still come out below normal for monthly precipitation. However, with a little under two weeks to go in the month, there is still plenty of time for models to change — for better or for worse!

Regardless, with the return of rain forecasted, there’s extra incentive to get outside and enjoy the sun this weekend. But as I mentioned before, make sure to dress warmly. It’s almost December, after all.