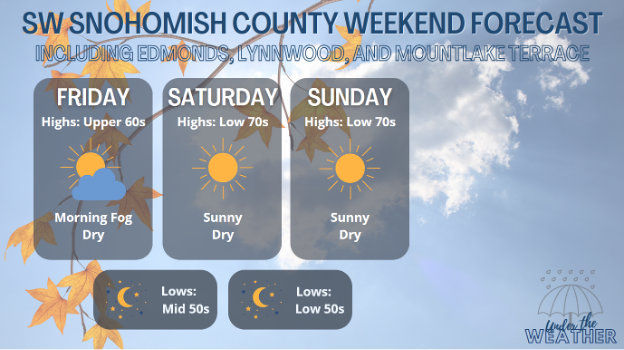 The rain and cooler weather should be back by now, in my opinion. And we definitely shouldn’t be dealing with any wildfire smoke—it’s October, after all!

No matter how much people may love the sun and warm weather, many people also look forward to the fall season. There’s just a dreaminess to dressing in flannels and sweaters, going to a pumpkin patch or corn maze, hearing rain fall outside and, of course, seeing the leaves change colors.

While we are seeing fall festivities continue as normal and leaves are beginning to change, the weather is not wanting to cooperate. So far this month, the closest we’ve had to rain is a little mist. Since 1998, this is only the fourth year where we haven’t seen any measurable rain in the first five days.

Thus far, October’s weather has been a continuation of what we saw in September. Check out the following graph, which shows the total precipitation from Sept. 1 through Oct. 5 for each year since 1999. As you can see, in that stretch of time, we’ve only seen 0.07 inches of rain measured at KPAE—the lowest available year on record.

The lack of rainfall has helped contribute to either “abnormally dry” or “moderate drought” conditions for not only Western Washington, but the entire state, which can be seen in the image below. 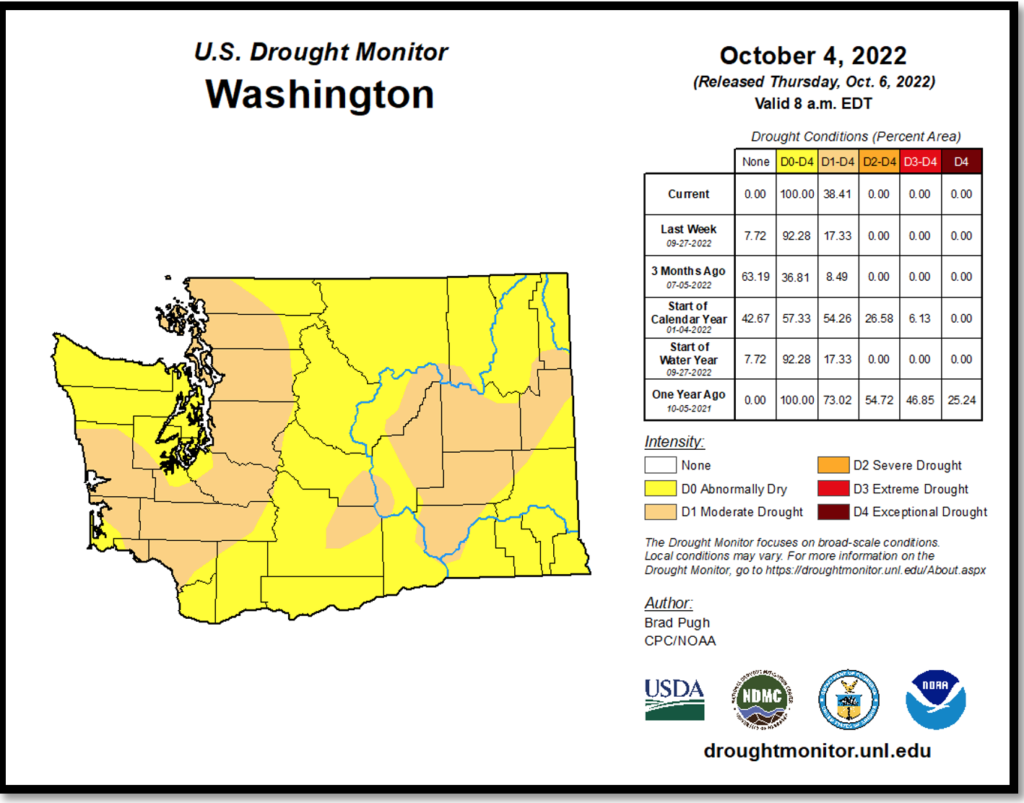 We’ve also seen three days this month with highs in the 70s, which is tied for the second-most 70-degree days in the month of October. Two of those days actually set a record daily high for Paine Field. At this time of the year, we should be seeing high temperatures in the low 60s.

Still, in October, the weather can change fast. We could see a dry start to the month, then be pummeled by a couple significant storms, which could effectively erase any precipitation deficit we had for the month. However, at this point, models are suggesting that this pattern of dry weather will continue through at least next week.

An upper-level ridge is expected to build over the weekend, which will help maintain warm and dry conditions. There are a couple things to note, however. First, there is the chance of morning fog forming, which we’ve seen the past few days. If you plan to drive in the mornings at all and encounter fog, make sure to take necessary precautions, such as slowing down, using fog lights and adding extra distance between you and other cars.

Second, easterly winds are expected to bring some more smoke into our region, which could decrease air quality in some areas. For the past few days, we’ve generally seen the air quality in the “moderate” range of the AQI. Over the weekend, we may see similar or slightly worse AQIs, meaning that if you are more sensitive to smoke, you’ll want to be a bit more careful.

Highs are expected to be in the upper 60s to low 70s over the weekend, with no rain. The ridge breaks down slightly on Monday, with the slight chance of some light showers. Only a handful of ensemble members show any rain falling, so this isn’t looking very likely. Afterward, the ridge rebuilds again, which will help keep us dry. A decline in temperatures to more near-normal values are expected for the start of the week, so we may at least be able to start adding in some more traditional fall clothing again.

To conclude, take a look at the following graphic:

It shows the number of rainy days we’ve had for each October since 1998 at Paine Field. The lowest completed value so far is 12 back in 2019—but with the forecast and trends, 2022 may give 2019 a run for its money. This will be something to keep an eye on, though we still have nearly the entire month for things to change. Now, if you excuse me, I’m off to go do a rain dance (kidding!).