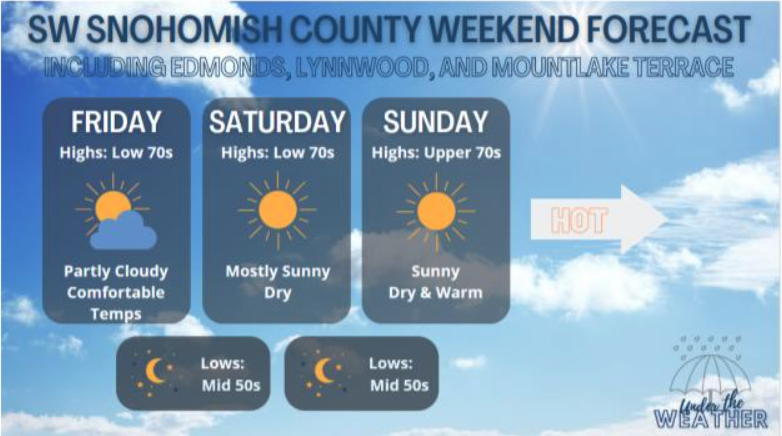 At this point in the summer, we’ve had a grand total of three days that hit a high temperature of 80 degrees or higher (according to data at Paine Field). All three of those days occurred almost a month ago with the heat wave that happened at the end of June. Since then, there have been two days just shy of hitting that threshold at the airport.

Take a look at the graphic below, which shows the number of days with the high temperature reaching 80 degrees or higher for each year since 1999.

I find it super interesting to look at graphs like this and to see the fluctuations from year to year. Back in 2018, we had nine days in a row with highs in the 80s (which ranks No. 1 in the number of consecutive days in the 80s)—so the higher total makes sense. Back in 1999, the entire summer only had one day above 80, something that seems a little hard to believe.

We still have several weeks left where highs in the 80s are climatologically possible, meaning that we will likely see the total of three days keep increasing. In fact, we could be adding to it by next week. More on that in a moment.

On Friday and Saturday, we will see some upper-level troughing, which will lead to some increased cloud cover, especially in the mornings. Friday is expected to be cloudier longer than Saturday, before burning off later in the day. Temperatures will be slightly cooler, with highs in the low 70s both days. No rain is expected. Then the warm-up begins.

Upper-level ridging begins developing and strengthening by Sunday, which helps to warm us up. Highs increase back into the upper 70s, and some areas may even reach the 80s.

Strengthening continues through the first half of the week. Take a look at the following model depiction for Monday evening. The ridge looks very healthy. 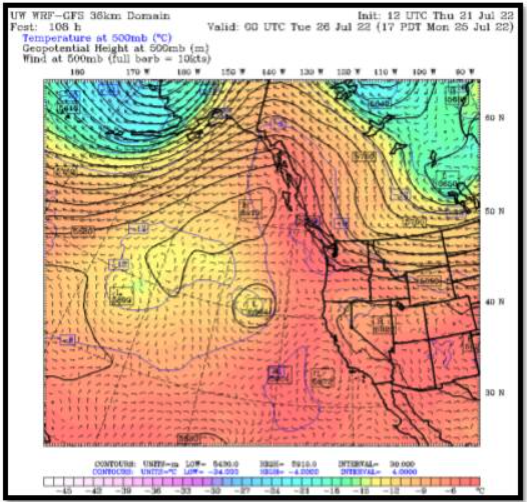 At this point, it’s looking like we could see highs in the 80s for at least three days, which would double the year’s tally thus far. Our second 90-degree day of the year at KPAE could also happen next week. To make matters even more challenging, overnight lows are expected to remain in the 60s, which would provide little to no relief from the warmth, especially to those who don’t have any form of air conditioning in their homes.

Whenever high heat is possible, it’s important to be prepared and aware of how to best handle it. One needs to consider all members of their family, including the elderly, infants and pets. Some great tips can be found here. One of the biggest things to remember is to stay hydrated and limit outdoor exposure, especially for those who are more heat-sensitive.

The exact high temperatures may not be pinpointed completely, but regardless, there is quite a good agreement between models that the big warm-up is coming. Again, make sure you are prepared for this possibility and plan ahead. Before then, however, take advantage of the cooler, comfortable temperatures expected over the weekend.

Have a great weekend/week! Stay cool out there.