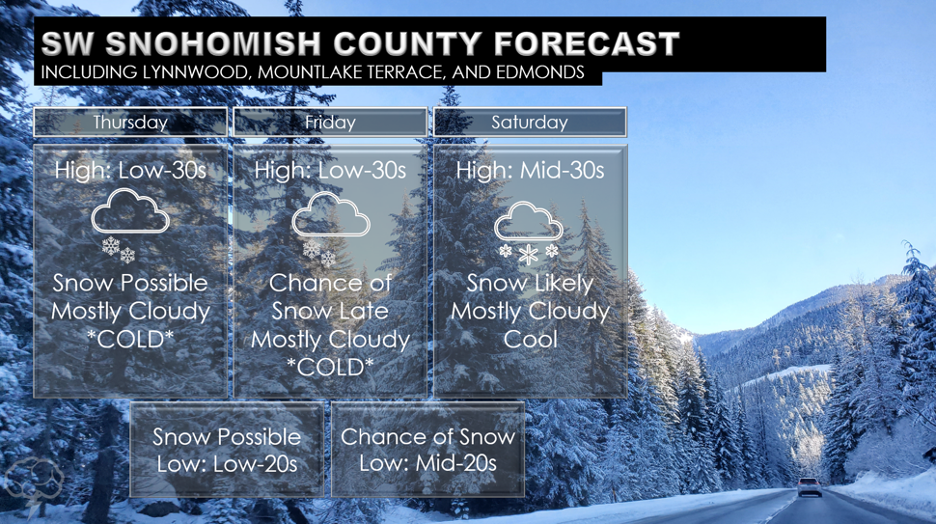 A couple weeks ago, I wrote these words: “Don’t lose hope just yet if you want to see snow in the lowlands this winter—we still have February! I may or may not be rooting for a repeat performance of February 2019.” Lo and behold, I may be getting my wish.

By now, most of you have probably already heard rumblings about the potential of snow in the coming days. Not only is there the potential for snow, but there’s the potential for impactful snow — and that would likely lead to significant impacts, especially on the roads.

At this time, there are a few opportunities that have the capability to give us some snow. As I’ve mentioned before, to get snow, we need to have both cold air and moisture in place, a feat that is quite difficult to accomplish in our neck of the woods.

However, we already have one of those ingredients in place: cold air. I’m sure you’ve noticed it if you’ve stepped outside at all—it’s frigid out there! This cold air is expected to stick around through the weekend. In fact, over the next few days, we have the possibility of having record-breaking cold high temperatures. This is possible on Thursday, particularly, which currently has a record low high temperature of 33 degrees.

So, what about the moisture? The first opportunity for snow in our region comes Thursday through Friday morning. However, this system is likely hitting a little too far south for us in Southwest Snohomish County to receive significant snow. We could see some flakes and maybe some light accumulating snow, but the bulk of this storm will impact the South Sound. You can see this in the European model for total snow (which does not mean accumulated snow) through Friday morning: 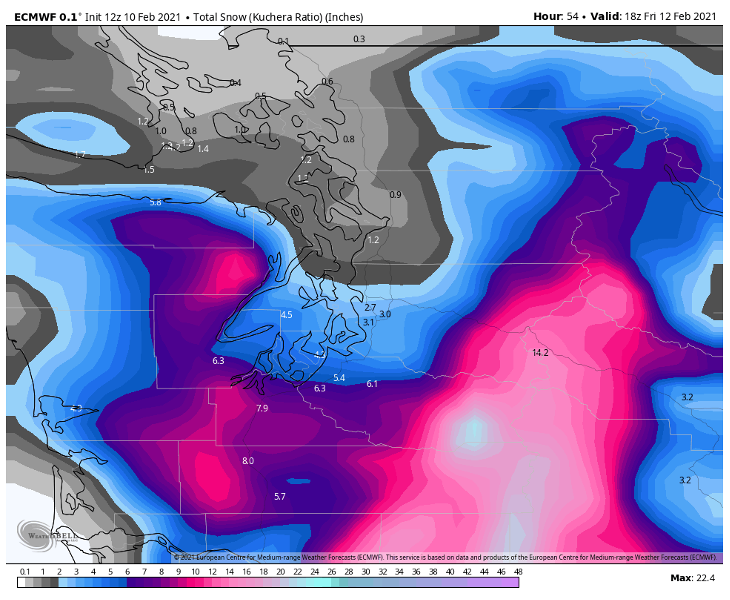 I’m not going to lie, there’s an ounce of me that’s a little jealous of our neighbors in the South Sound. However, we may finally get our turn at some decent snowfall Friday night through Saturday.

I’ll show you what some of the models are showing so you can see for yourself.

First, here’s the GFS deterministic model run for total snow (again, not total snow accumulation) through Saturday night. Keep in mind that this would include any snowfall that occurred with the first system. 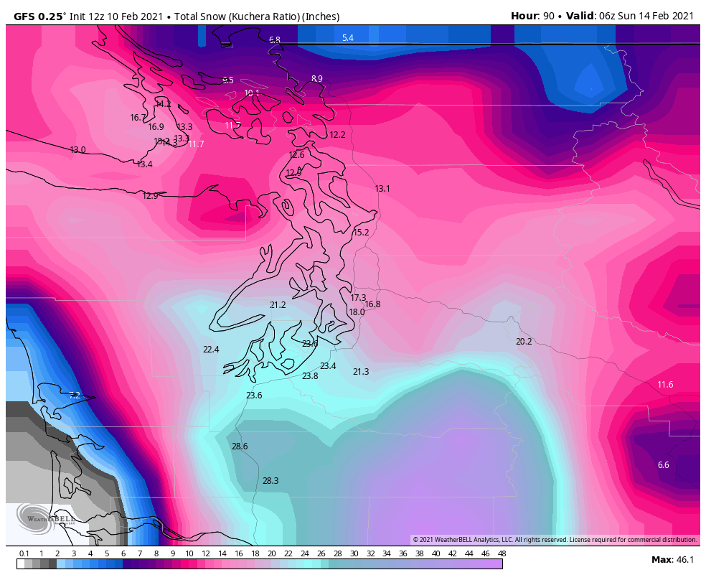 This model shows a whopping 15.2 inches at Paine Field! The European model shows a similar story, shown below, with 15.3 inches of total snow over the same timeframe. 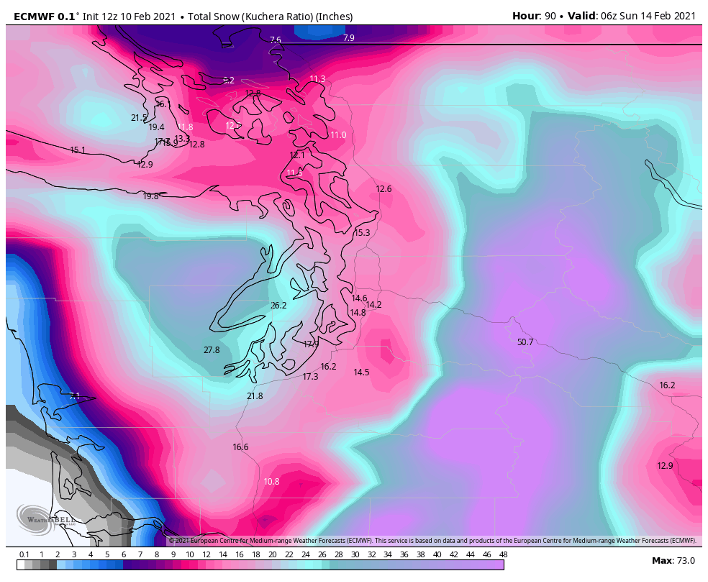 But remember, as with any forecast, especially a snow forecast, there is uncertainty involved. Therefore, it’s important to turn toward probabilistic forecasts in addition to the deterministic forecasts that I’ve shown thus far. Below is both the European and GFS Ensembles for total snowfall at Paine Field. 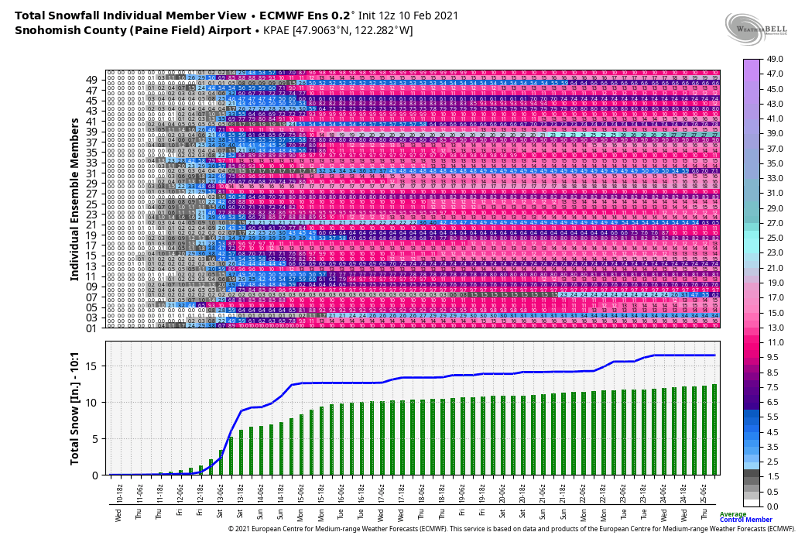 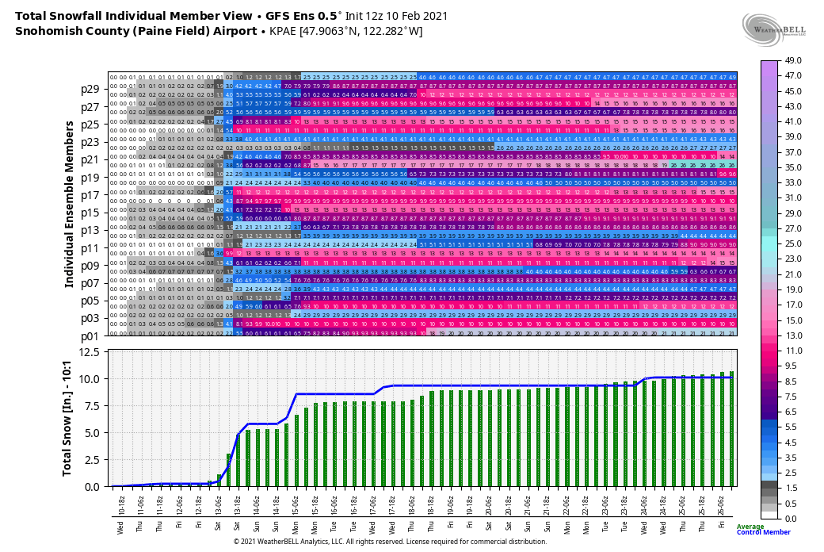 As you can see, a good portion of the ensemble members for both models show decent snowfall amounts, with a lot of pink—indicating amounts of about 10-plus inches—fitting for Valentine’s Day weekend. There is a relatively good consensus among the different models and their various members that we will receive quite a bit more than just a few snowflakes this weekend.

This second storm is shaping up to be the most significant of the bunch, but there is the potential for another round of snow Sunday into Monday. At this point, that is too far in advance to talk specifics on how much snow could fall for this third storm.

Will this weekend rival the snowstorms of February 2019? It’s possible. Specifics on exact totals of snow are still heavily dependent on the tracks these storms hit, so it is subject to change. It is especially important at this time to keep an eye on the forecast for any additional updates—this is an ever-evolving forecast with potentially significant impacts, so it’s important to be prepared.

For example, there is a good chance of pipes freezing, so precautions should be taken for that. In addition, make sure to take proper care of pets in the cold—don’t leave them outside without a way to keep warm! And of course, if it’s snowing, it is better to stay off the roads and stay home, but if you must go out, it is a good idea to check road conditions before leaving. 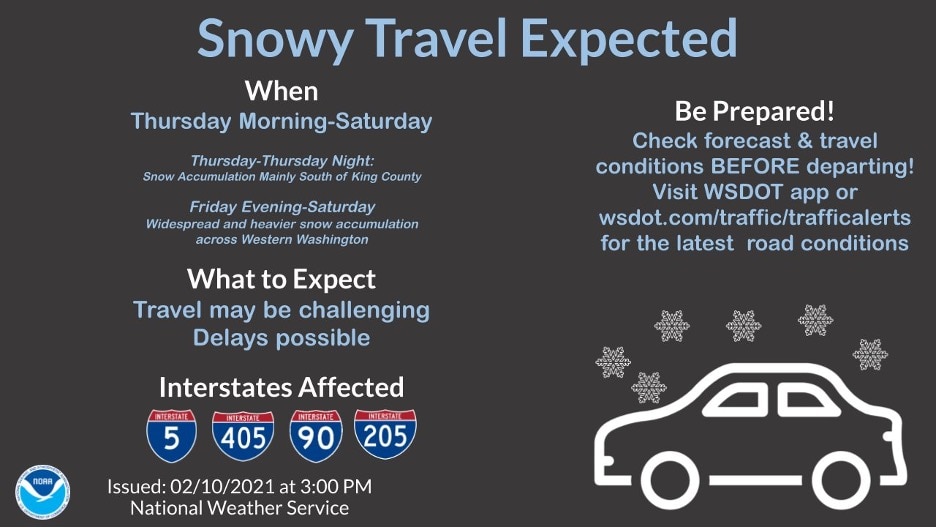 Just when it seemed like winter was on its way out, it had to remind us that it still has a little over a month left, and it’s not quite finished yet.

Again, remember to keep an eye on the forecast in the coming days. The Seattle office of the National Weather Service is working extremely hard to provide forecasts to help keep everyone informed, and it is a great resource. You can find them here: www.weather.gov/sew.

And remember, all forecasters have some busy and hectic days ahead of them—be thankful for their hard work and dedication to providing potentially life-saving forecasts.