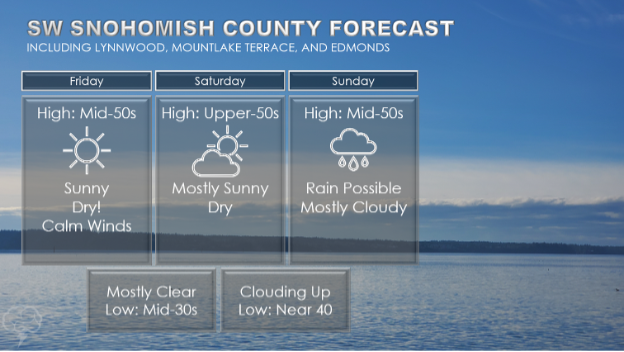 According to the calendar, it still is technically winter, but it definitely felt more like spring than winter in the past few days. With the exception of some pop-up convective showers in some places, we have been predominantly dry since Sunday. In fact, at Paine Field, there has been no measurable rainfall since Sunday.

This nice springlike weather is attributed to a ridge of high pressure over the region. Air descends with an area of high pressure, and as it descends, it warms and dries out. As a result, the weather associated with areas of high pressure tends to be dry and potentially sunny (cloud formation is inhibited but not impossible).

Over the next couple days, this ridge will continue to be our main weather-maker. Take a look at the University of Washington WRF-GFS model of geopotential heights at 500 millibars for Friday evening, which shows the ridge in full force over our area. 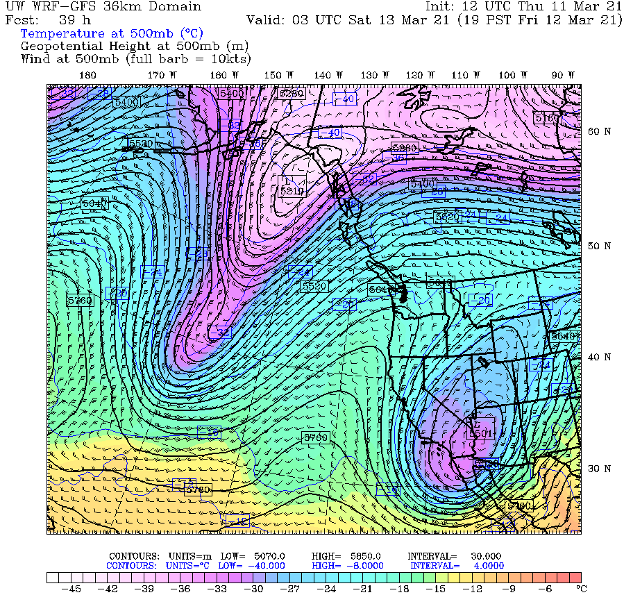 Just as expected, this ridge will lead to nice weather over the next couple days. Both Friday and Saturday are expected to be dry. High temperatures are expected to be in the mid-50s on Friday, but on Saturday, there is the potential to get close to 60 degrees. So far this year, we have not made it to 60 degrees. On average, using data from Paine Field, our first 60-degree day occurs on March 4. Sounds like we’re due! There is the possibility for a few more clouds on Saturday, but overall, it should still be a nice day.

Friday night into Saturday is expected to be mostly clear—a good night for stargazing, perhaps? One thing to keep in mind, however, is that there is a caveat to clear to mostly clear skies overnight. Lows are expected to be a bit on the chilly side Friday night into Saturday due to the fact that heat is able to escape more easily without clouds present. Clouds act like a blanket and traps heat in our atmosphere. If you’re planning on being out and about Saturday morning, you may benefit from a nice jacket. By later in the day, you may not need it.

If you’re a big fan of all this springlike weather, Sunday will likely be less than ideal for you. Clouds begin to make a comeback Saturday night, which will lead to slightly warmer overnight lows. The ridge is expected to break down, which can be shown in the image below. A trough takes its place. 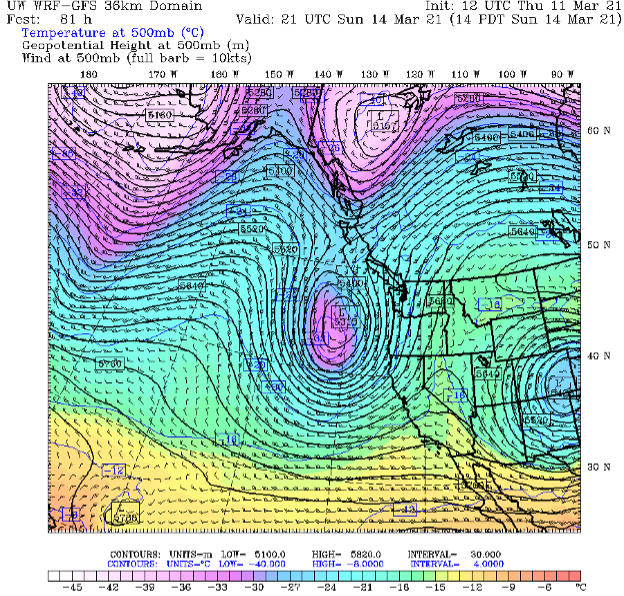 As a result, a frontal system is expected to impact our region, thus bringing the chance of rain back into the forecast. There are some differences between different models for the timing of the rain and the amounts, but it’s not looking like anything we aren’t already accustomed to.

Going into next week, there are again differences between models on whether we will go back to springlike weather or see some more chances of showers at times. There will likely be a bit more consensus as we get a little closer to next week, so to stay updated, keep an eye on the forecast.

In the meantime, have a great weekend and enjoy the sunshine!