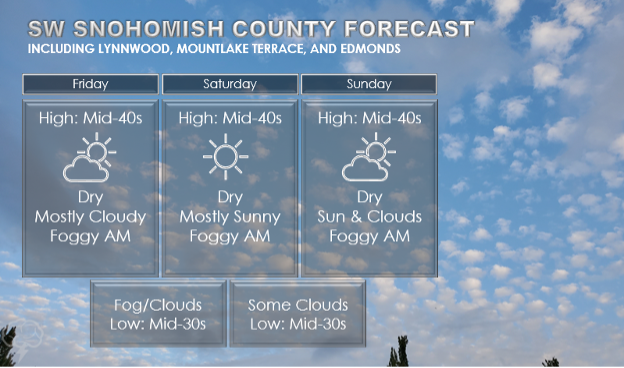 The month of January is already more than halfway over and compared to the month of December, things have been relatively calm in the weather department. We had the cold start to the month—a continuation of the cold snap after Christmas—followed by a wet atmospheric river event, but apart from those, not much has happened.

Over the course of the past week and a half, we had a six-day stretch of dry weather at Paine Field—the longest dry streak KPAE has seen since Aug. 9-15.  This is quite impressive, if you ask me. And to make things more impressive, we may see another dry stretch of that length (if not longer) starting this weekend and going into next week.

After a wet couple of days, we are expected to dry out starting Friday, thanks to a developing upper ridge of high pressure, shown below in the UW WRF-GFS model depiction. 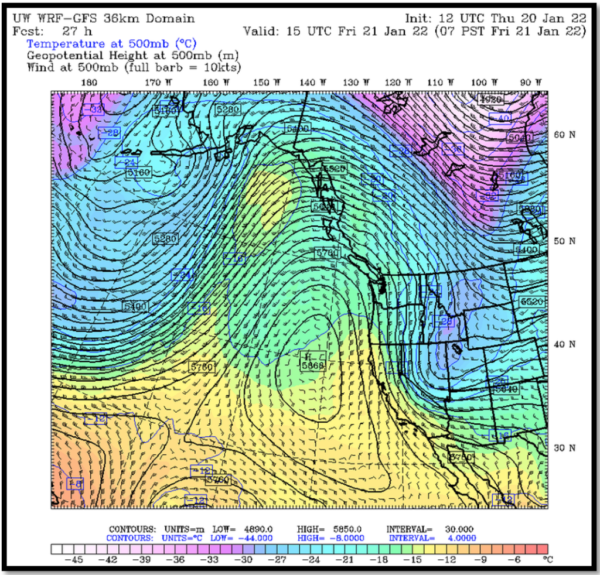 This ridge will block any systems from reaching our area, deflecting them to the north. The ridge is expected to stay in place through at least the middle of next week, keeping us dry for quite a few days. Temperatures aren’t looking particularly exciting at this point either, with highs in the mid-40s and lows in the mid-30s.

When we have a prolonged stretch of high pressure over our area, a couple concerns do arise, however.

First, morning fog will likely be an issue over the next several days. There are different types of fog, but the type we most often see in our area is called radiation fog. This fog forms when heat is “radiated” back to space during clear or partly clear nights. This escaping heat allows temperatures to cool to saturation, leading to condensation and thus, fog formation. Fog thrives in environments with low-level moisture and light winds. In our current situation, with the wet ground, high pressure and partly cloudy night skies, we have the chance to see some decent fog. If you’re driving in the mornings and fog is present, make sure to take the necessary precautions (i.e., increase driving distance between cars).

A secondary issue is primarily related to the prolonged nature of this ridge. Air in areas of high pressure tends to sink and be stable. As a result, any pollutants released at the surface have the chance to be trapped instead of mixing out. These pollutants can build up over the span of several days, which could lead to some minor air quality issues. Nothing severe is likely, but the potential dip in air quality is worth mentioning, especially for those more sensitive to that.

Even if we see one or both of these issues over the coming days, we don’t have to let that spoil the fact that we will actually have a nice stretch of weather in January. It seems like those are few and far between at this time of year, so enjoy it! It should be a great opportunity for some nice winter walks or bike rides.

At this time, according to model ensembles, the next potential for rain comes late next week into the weekend. Make sure to pay attention to forecasts to get the most up-to-date information on the next weather system that could impact us.