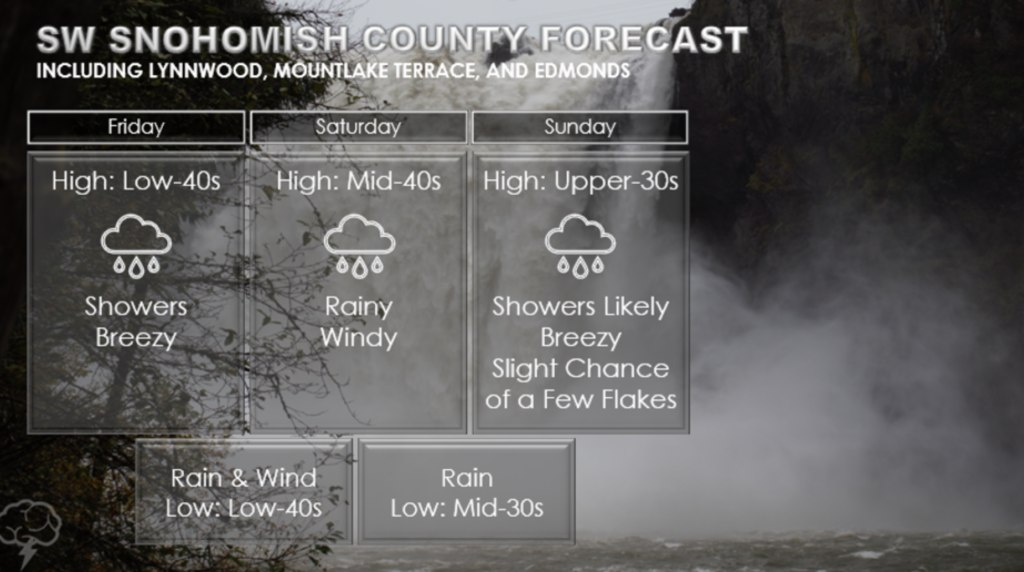 It is hard to believe that Christmas is only a little over two weeks away. For those of you who are still in the process of buying and wrapping gifts, it’s getting close to crunch time! Most weekends in December are occupied by people doing shopping or attending holiday parties. Whether you’re attending an ugly Christmas Sweater party or heading to the mall this weekend, you’ll need to prepare for some wet weather. More on that in a moment.

After record-breaking precipitation over the course of meteorological fall for many locations in western Washington, the month of December thus far is running slightly behind average in precipitation. Through the first eight days of the month, we’ve seen 0.82 inches of rain compared to the average 1.25 inches. This is not a result of a lack of rainy days, however, as in that same timeframe, we’ve seen measurable rainfall on all but one day.

As I mentioned briefly before, the rain is expected to continue into the weekend as a rather potent storm heads into our area. In addition to the rain, the storm is expected to bring gusty winds and heavy mountain snow.

The action begins on Friday as the storm approaches a. You can see the storm swirling in the Pacific in the visible satellite image below. 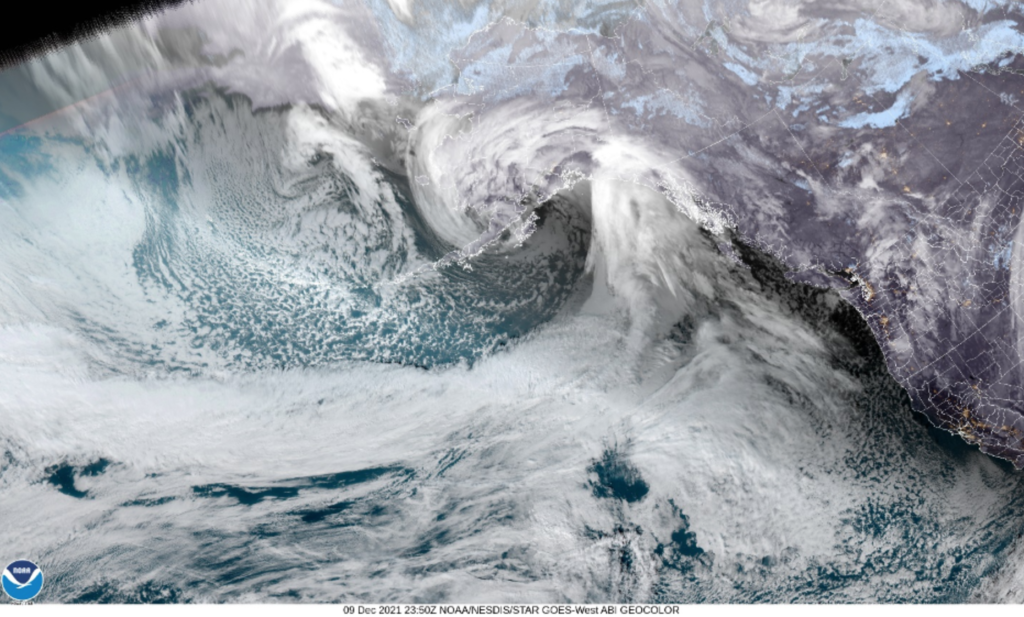 We will see winds pick up over the course of the day Friday. The National Weather Service in Seattle has issued a wind advisory for our area from Friday night into Saturday morning, meaning that winds of 25 to 35 mph with gusts up to 55 mph are expected. Some rain is expected over the course of the day, as well, but most of the action is expected to be Friday night into Saturday.
A cold front is expected to go through the area during this time, leading to significant mountain snow and lowland rain. Take a look at the UW Ensemble plume for cumulative rainfall over the next few days. 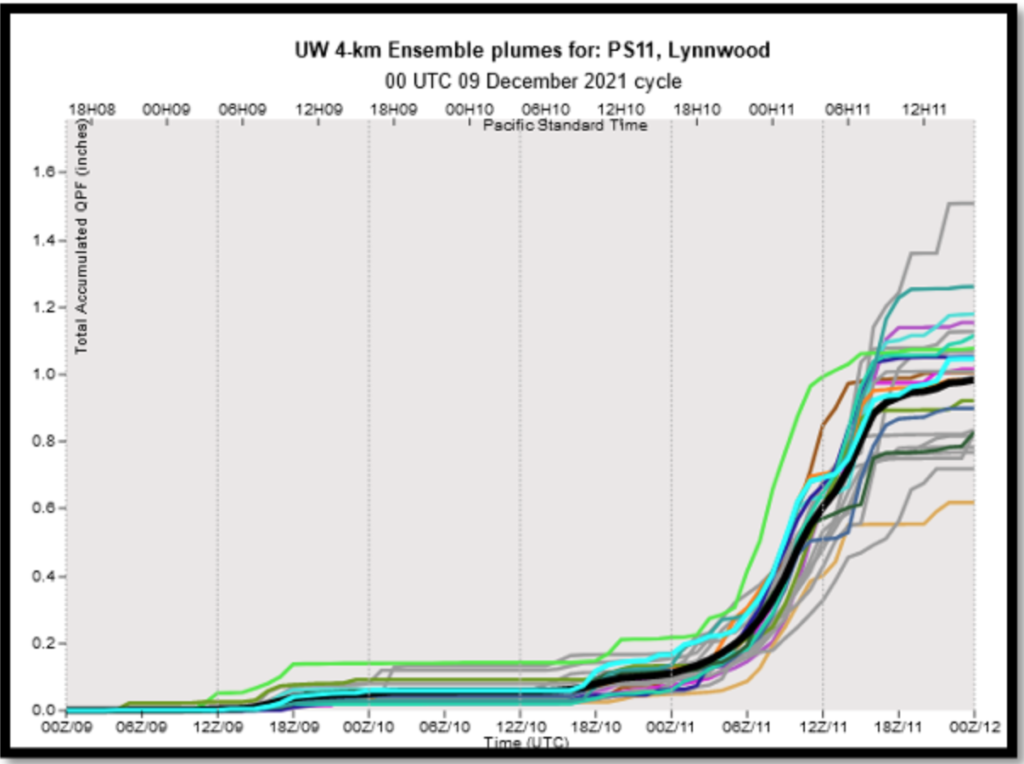 Each color line shows a different member of the ensemble, each with unique initial conditions to give a range of potential solutions. The average value of these members, which is generally more skillful than any individual model run, shows right around an inch of rain through Saturday evening. That’s pretty impressive. But this may be even more impressive: 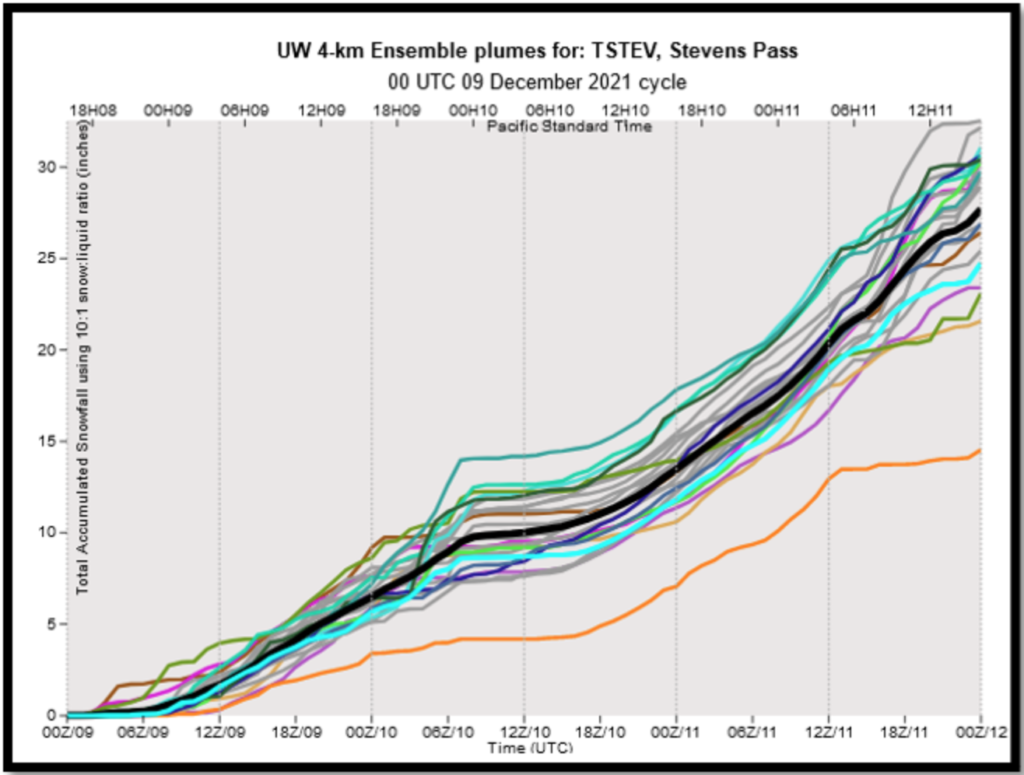 This ensemble, which is for Stevens Pass, shows close to 28 inches of accumulated snowfall as the average value of all ensemble members. That’s over 2 feet of fresh snow over the course of a few days.

Needless to say, you may want to avoid pass travel during this time if you can help it—or at least make sure you are extremely prepared for less-than-ideal driving conditions.

Back in the lowlands, temperatures are expected to drop into the mid-30s Saturday night and mostly stay in the upper-30s on Sunday. With some moisture in place, some hills may see a few snowflakes fall—nothing is expected to stick if that does occur. Some showers are expected to continue on Sunday after Saturday’s frontal passage. There is a chance for thunderstorms to occur, primarily on the coast, due to the instability present after the front passes. I’m not holding my breath for any of those potential storms making their way to our area, but it’s not impossible.

Next week’s weather is looking a bit quieter at the moment, but with colder temperatures and some showers—nothing quite to the caliber of this weekend’s storm. With the possibility of some moisture in place at the same time as colder temperatures, some lower-elevation snow is not out of the question. At the moment, many of the ensemble members for both the European and GFS models are showing that some snow is possible. However, there is still a lot of uncertainty and time between now and then. You can cross your fingers, but I wouldn’t hold your breath just yet. To get updates on this possibility, make sure to follow the Seattle office of the National Weather Service on social media or keep an eye out for updates on their website, which can be found here

Have a great weekend! Stay warm and dry.