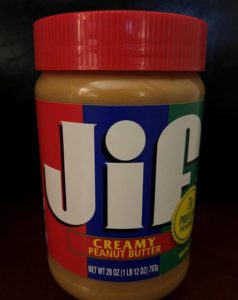 The Washington State Department of Health is working with local and federal public health partners to investigate a case of salmonella that is likely linked to consuming contaminated Jif brand peanut butter products. The Whitman County resident, who was not hospitalized, has a confirmed case of salmonella ssociated with a nationwide peanut butter outbreak involving 11 other states.

The J. M. Smucker Co. has issued a voluntary recall for select Jif peanut butter products sold in the U.S. due to potential Salmonella contamination. Consumers should immediately dispose of Jif peanut butter with lot codes 1274425 through 2140425, with “425” at the end of the first seven numbers, and refrain from eating any of the recalled product. Lot codes are included alongside best-if-used-by date. Consumer should also wash and sanitize utensils that may have touched the recalled peanut butter.

Salmonella is an organism that can cause serious and sometimes fatal infections in young children, frail or elderly people, and others with weakened immune systems.

Nationwide, the outbreak has led to two hospitalizations, but no deaths. Other states involved in the outbreak include Arkansas, Georgia, Illinois, Massachusetts, Missouri, New York, North Carolina, Ohio, South Carolina, Texas, and Virginia.

“Salmonella infection is very serious, and it is important that people avoid consuming the recalled peanut butter products because it could make you sick,” said State Epidemiologist for Communicable Diseases Scott Lindquist.

People usually become sick from salmonellaone to three days after infection. Symptoms include diarrhea that can be bloody, fever, chills, stomach cramps and occasionally vomiting.

Most people infected with salmonella recover without treatment after four to seven days. However, some people – especially children younger than 5 years, adults 65 years and older, and people with weakened immune systems – may experience more severe illnesses that require medical treatment or hospitalization.

Those who have eaten the recalled product and feel ill should consult their health care provider.

Additional information can be found here: