The Washington State Patrol said Friday it has referred charges to the Snohomish County Prosecutor’s Office on five men after a months-long investigation into urban graffiti on area roadways.

Beginning in late 2019, Snohomish County troopers observed a large increase in graffiti on interstate and state route bridges, traffic signs and sound barriers in the southern and central areas of Snohomish County.  The cost to the Washington State Department of Transportation (WSDOT) for covering the graffiti is estimated to exceed $100,000 a year in Snohomish County alone, the state patrol said. 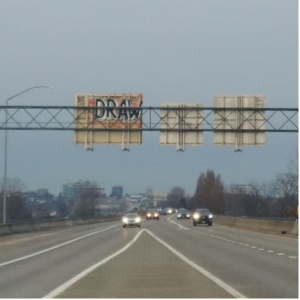 In response, troopers started a Problem Oriented Public Safety project “to address the cost to taxpayers and frustration expressed by many drivers,” the patrol said. Troopers actively searched for graffiti daily, photographing and recording it for investigative purposes, and reporting it to WSDOT for prompt removal. Troopers obtained search warrants for social media accounts, reviewed surveillance video, and conducted several interviews. A total of 43 charges of third-degree malicious mischief and nine charges of seond-degree malicious mischief were referred to the prosecutor’s office.

Troopers will continue to investigate graffiti and refer cases for prosecution. In addition to the criminal charges, these cases are being shared with WSDOT and the Washington State Attorney General, who may seek civil restitution for the damage. Removal of the estimated $50,000 of graffiti investigated on overhead traffic signs and bridges may require lanes of interstates and state routes to be closed for worker and motorist safety.

The state patrol said it is also sharing investigative information with law enforcement partners to assist them with identification and prosecution of acts of graffiti on municipal and private property.

Troopers recommend that victims of such graffiti quickly mark or cover it, report it, and remove it. Urban graffiti is highly valued by those doing it for its sharing and likes on social media, and marking or painting over it diminishes its photographic value, the patrol said.