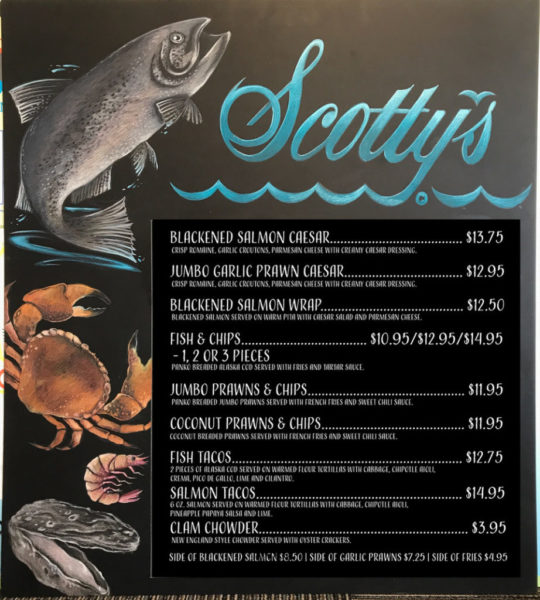 We are pleased to announce new advertiser Scotty’s Food Truck — a festival favorite for many years now located at Edmonds’ Five Corners on Fridays and Saturdays.

Chef Scotty has an interesting culinary history: He was born in Japan and spent many years living near the Mediterranean coast in Turkey. A local village fisherman would take him out early in the morning to pull in nets, bringing fish back to clean and prepare with locally grown produce.

Chef Scotty was hand-selected as the executive chef to open the iconic Salty’s on Redondo and continued as executive banquet chef at Salty’s on Alki until 1997. Developing a reputation, Scotty prepared culinary delights for the Eagles Tour, Paul Allen’s Ticketmaster Christmas Party and Seafair for Budweiser Hydro, just to name a few high-profile events.

They now offer their Blackened Salmon Caesar Salad and other entrees on a weekly basis. They focus on fresh ingredients and seafood-based dishes, but also have options for vegetarians. Chef Scotty’s “new” and permanent location in Edmonds is at Calvary Chapel, in Edmonds’ Five Corners neighborhood. His food truck is parked at 8330 212th St. S.W. from 4-7:30 p.m. on Fridays and Saturdays.

Scotty’s NW Catering, also headed by Chef Scotty, encourages inquiries on catering. He invites, “Want to have the truck at your event? Give us a call and describe your party. We can also do classic catering.”